Tell Me A Story: Jesse Jordan 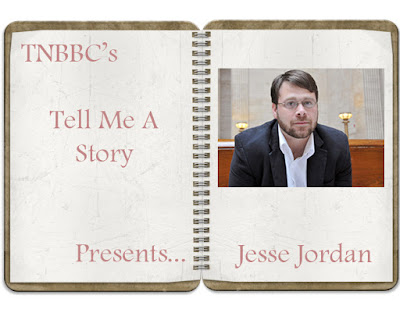 
This month's story comes from Jesse Jordan. Jesse is a writer and editor currently living in the suburbs of . He is an MFA graduate of and a member of ’s “Reading Under the Influence.” His short stories have appeared in numerous publications and Gospel Hollow is his first novel.


Gospel Hollow is "set during five days of a punishing Chicago blizzard, Gospel Hollow follows the clumsy and desperate investigation of Tommy Hull as he digs through the lies and silence of his remaining family to get the answer to the most pressing question of his life: what happened to Alice Hull on that cool September night fourteen years ago?" *goodreads

’s a cop—a detective, I think—and a regular at Mary’s, the bar I work at. He’s a steady drinker, one of those four-nights-a-week guys with perfectly shined shoes and crisp lines in their suits. A sharp, quick guy with a quiet, dry sense of humor. He’s always seemed too substantial and discerning to be downing drinks in a dive like Mary’s, but maybe he knows something I don’t. I’m not complaining, you understand, I’m happy to have him. I can see him balancing cocktails and Marlboro Lights while he lectures me on nanotechnology or film noir or the problems with marrying a redhead.

I remember him looking at me that night.

was the one who gave me the idea. He set this whole thing in motion. One night, about four months ago—it was a weeknight, I remember that—he came in. He was all off that night, all wrong. His hair was askew and hanging partially over his face, its usual lines corrupted by stray eruptions. His suit looked wrinkled, his tie loosened, and his off-white shirt appeared to have three small drops of blood just right of center on his belly. His perpetual cool energy was gone, all blips and blaps like he was wearing a suit of my anxiety, and instead of his normal Jack and Coke he ordered two shots of Jack and a Heineken upon collapsing on his stool down at the end of the bar by the Cold War-era fridge.

For a while that was it. He was drinking hard and fidgeting, tearing up coasters and checking his watch. He called his wife and told her he’d be working all night, and after an hour or so he made another call, and though he seemed to come back noticeably more at ease, he continued to drink like a newly freed man. Every few drinks I put one on the house and he smiled and acknowledged it, but beyond that we didn’t talk at all.

By one thirty that morning Mary’s was empty but for . I pulled my stool up across the bar from him, not sure how to broach the subject of leaving. wasn’t the kind of guy you had to kick out.

“Tommy, I almost got fucked tonight.” I looked at him but he was just staring down into his empty shot glass. His words were thick and slow. “Whole fucking career, kid. Just—goddamn I was sure of it.” And then he was quiet again, still looking at that empty glass.

He looked up, eyes unfocused and blinking, and he smiled. “Everything worked out, that’s what happened.” I nodded. I wasn’t going to press it. “You know what, Tommy? Here, I’ll tell ya. Get me another shot, okay?” I poured it and pushed it over and he raised it up over his head with a stiff, wobbly arm. I raised my beer and waited for his toast. “To,” he began, pausing to let a small burp out the side of his mouth, “Detective Steve Pittman, a fucking first-class genius. Saved my goddamn ass.”

“Detective Pittman,” I said, and he smiled and we drank. It was then, slamming down the empty glass and coming up smiling, that he told me.

“Okay,” he began. “I’m going to tell you about this, but you can’t tell anyone, okay? You can’t say a word, Tommy. Frankly, I can’t really tell you most of it anyway, but, still, not a word, okay?” I nodded. “Alright. So, me and four other guys have been working a detail for the last six months and there’s a specific target, do you know what I mean? A guy or a group, we’ll just call ’em ‘The Target,’ okay? So, we’re not headquartered out of regular police station now, we’re off on this site in an industrial complex, couple blowed-out old buildings. Now, recently we made some big discoveries, you know, recordings, seizures, it doesn’t matter what it is, just evidence. We’ll just call it ‘evidence,’ okay? Now we got enough and we make the pitch to the DA and he green lights it and the next day we start making arrests. That night we go back to the building we’ve been using and a big chunk of the evidence is gone. Just fucking gone. Do you get it, Tommy? We are fucked. These guys are going to be arraigned in the morning and we’re going to have to go to the DA and tell him, we got nothing. Let ’em go. I mean, this is setting fire to your career shit. We’re all freaking out, we’re yelling at each other and then, then Detective Steve Pittman,” and here he raises his beer, and again I mirror the gesture, “he gets everyone quiet and he says that we know it was here this morning. We know that, okay? So, he says, we’re all going to sit here and we’re going to tell every part of our day today, everything we remember. We’re going to recreate the day, you see? We’re pissed off and losing it, everyone blaming everyone else, but he calms it all down and makes us do this. So we started, and about an hour in, one of the guys mentions that he saw a CI outside again, and the guy whose CI it was started freaking out like this CI shouldn’t know where we’re based out of. Does this make sense? See, one of the guys had a CI he’d been working with on this case, but he always met him somewhere else, and he’d never told him about this makeshift headquarters. The other guy, he’d seen the CI around twice, once a couple weeks ago, and then again this morning, and he never thought anything of it because he always figured the other guy was meeting him there. So these two, they starting talking about could it be a coincidence, could it be this or that, but me and Pittman, we know. So the five of us saddle up and we start hitting the pads this douchebag usually flops at, but we get nothing. Finally, Castro—that’s the guy who’s been handling the CI—he says that sometimes he crashes over at his sister’s place.” tapped his glass and I poured it full again, and I was trying to pay attention to what he was saying but all I could think about was Pittman’s idea. Get them all together. Recreate the day.

“We find this fucking guy nodded out in front of _The Lion King_ at his sister’s place, a duffel bag with our shit right there next to him. I mean, to talk to this guy you’d swear he’s retarded, but he figured out who we were after, and he followed Castro back one time and came up with this whole plan. He was going to sell it back to, uh, to the Target.”

“Yeah.” We were both nodding and we sat there in silence, lost in our own minds. Him in the absurdity and good fortune of his night, and me in this plan, this idea of finding out what actually happened that night Mom disappeared. I don’t know how long we remained like that. Eventually he slapped a couple twenties on the bar and I jumped at the sound. He nodded once before standing up on virgin legs, teetering before finding a handhold on the bar. He pulled his suit coat back on and walked to the door with deliberate steps, waving over his shoulder as he disappeared. I locked the door. Then I just stood there. The bar was empty and small and dim, and the only sound was the hum of the old fridge and the meager traffic outside. That was it. It was that simple and the idea, seemingly fully formed, took over everything at that moment.

I had to get everyone together. I had to make them do this. I could actually see answers for once. I couldn’t see what they were, you understand, but I could see that they existed, way off in the distance. I began researching interview methods and found references to this kind of group recollection. Apparently it had been used in the aftermath of the My Lai Massacre to determine a timeline. With each discovery I felt the structure of my certainty building, felt the ground beneath my feet grow strong and sure.

That was the night I decided that I would be the one to pick up my brother from prison this morning.

I want to thank Jesse for participating in TNBBC's Tell Me a Story. If you like what you've read, please support Jesse by checking out his book.  Help spread the word by sharing this post through your blog, tumblr page, twitter and facebook accounts. Every link counts! And be sure to check back with us next month for the next installment....