Welcome to our Indie Spotlight series, in which TNBBC gives small press authors the floor to shed some light on their writing process, publishing experiences, or whatever else they'd like to share with you, the readers!

Today we are shining the spotlight on Stephen Baker

The Origin of Donkey Show:

Take a real story and play with the pieces 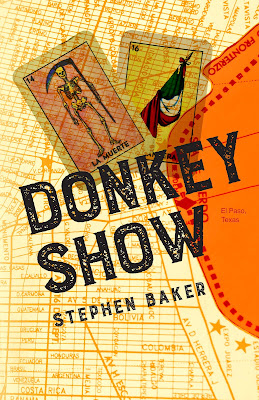 I was working a while back as a general assignment reporter at the (now defunct) El Paso Herald-Post when a freelance photographer returned from a harrowing experience across the border, in Ciudad Juarez. A reputed drug lord, Gilberto Ontiveros, and his henchmen had beaten and mock-executed the photographer, Al Gutierrez, apparently mistaking him for a DEA agent. Gutierrez brought back a death threat from Ontiveros for our lead drug reporter, Terrence Poppa.

The newspaper, naturally, ran with this as a series of front-page stories, nothing less than a crusade. It was accompanied by editorials accusing the Mexican government of sheltering the drug lord. This pressure eventually led to Ontiveros’ arrest. Our editors viewed it as a journalistic triumph.

Poppa was an excellent, hard-working reporter, who later was nominated for a Pulitzer for his investigative work. In his Herald-Post series, he reported that Ontiveros traveled around Juarez in a Mercedes limousine with a carload of "pistoleros" in front or back. The drug lord’s trademark, he wrote, was a briefcase with the words "The Boss" spelled out in diamonds.

For my novel, Donkey Show, I started with that same story, but changed it in crucial ways. What would happen, I wondered, if everything in the story had been wrong--if the original reporting had been flawed, and if the death threat had come not from the drug lord, but by underlings who wanted to see him thrown in jail? In such a case, the newspaper would be running its crusade based on misunderstandings. And the reporter--a lazy one, in my story--would have to put the pieces together.

That’s the essence of Donkey Show. I placed the story in 1993, just as the United States and Mexico (and Canada) were finalizing a continental free trade agreement (NAFTA). This gives the fictional newspaper more leverage in its campaign. It’s still a time when regional newspapers carry weight. The digitalization of media is still in the future. Cell phones, huge with antennas, are luxury items for the rich. In short, information is scarcer, and the resulting ignorance drives the plot on both sides of the border.

My 2014 novel, The Boost, also takes place along the border, though in the future, not the past. In fact, the protagonist of The Boost, a coder named Ralf, is the great grandson of Tom Harley, the lazy death-threatened reporter of Donkey Show. 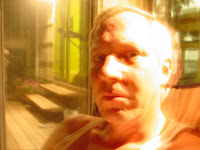 Stephen Baker has worked as a journalist and writer in many cities, including Paris, Mexico City, Caracas, Quito, Madrid, New York, and El Paso. His non-fiction books, including The Numerati and Final Jeopardy: Man vs. Machine and the Quest to Know Everything, explore the effects of technology on society.

His first novel, The Boost (Tor Books, 2014) is a near-future tale that, like Donkey Show, takes place along the U.S.-Mexico border. Kirkus Reviews called the book “a true delight of a techno-thriller that has deep, dark roots in the present.” Before moving to the New York area, Baker was a Paris-based European technology correspondent for BusinessWeek, where he headed up the magazine’s coverage of wireless technology and the mobile Internet.

He is a graduate of Columbia University’s Graduate School of Journalism and earned his B.A. at the University of Wisconsin. He lives with his wife in Montclair, NJ. They have three sons.

Posted by TNBBC Super Mod at 8:39 AM No comments: