An estranged mother and a daughter with a shared family trauma reunite after many years. Living together in the daughter’s house in Houston, they are still unable to talk to each other about deeper issues after so many years apart. So each begins to tell stories to the daughter’s two young children about their lives back home in Pakistan. Through the telling of their stories, the two women begin to understand each other’s pain and find peace.

Black Wings is about the power of storytelling. Mother and daughter experienced the same tragedy, but each experienced it differently, as we learn through the stories they tell. When tragedy struck, Laila was an adult woman who had made hard choices that gave her a comfortable but unhappy life. Yasmeen was a girl in her teens leading a charmed life where she and her twin Yasir finished each other’s dreams.

This novel is also about how often women’s decisions large and small are made from a defensive posture. Laila gives in to pressure and turns away from the man she loves to marry a man who will save the family business. Yasmeen travels 13,000 miles away to begin a new life in a foreign country in order to avoid her pain. As they walk through a crowded Karachi market, a mother wraps her arms around her daughter, elbows jutting out. When she walked through this market as a young woman, she tells us,

“Some of my older female cousins used to hold open safety pins, ready to stab men who pushed against their bodies.”

Each of them has a story to tell about a childhood adventure when she sneaked out of the house while her parents were distracted. They tell stories about witches, both imagined and real. While Yasmeen goes through the motions of her life in Houston, her heart remains somewhere else. All the stories she and Laila tell are set in Pakistan.

Yet, when Yasmeen returns to Pakistan with her mother and children, she struggles to rejoin a place some part of her never left:

“[I]n Pakistan, there were no straight lines, no packets with directions that explained the process step-by-step. We dropped our shoes off to the cobbler without expecting a receipt. And when the driver went to collect on our behalf, the cobbler sat on the pavement beneath a tree – always the same place – and our shoes were returned, repaired and polished. To participate in the system, we relied on instinct and history. But I had been away for so long that I had forgotten how to let go of directions and answers.”

This is actually the second edition Black Wings. It was first published 15 years ago by Alhamra Books in Pakistan, and the novel’s opening scene at the Houston airport is as timely in the current travel ban era as it would have been in 2004. While this book is not about geopolitics, it is about the power of the stories we tell. It is about how refusing to understand another’s point of view will harden our own pain, and how listening to each other’s stories can help us overcome the barriers we build between us.

Bronwyn Mauldin writes fiction and poetry and is creator of The Democracy Series zine collection. Her newest short story will appear in Gold Man Review in November 2019. More at bronwynmauldin.com.

Posted by TNBBC Super Mod at 7:20 AM No comments: 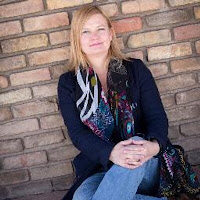 This is Nicole Walker.


Nicole is the author of Sustainability: A Love Story (2018), Where the Tiny Things Are (2017), Egg (2017), Micrograms (2016), Quench Your Thirst with Salt (2013), and This Noisy Egg (2010). She edited the essay collections Science of Story with Sean Prentiss and Bending Genre: Essays on Creative Nonfiction with Margot Singer. She is the recipient of a National Endowment for the Arts award and is a noted author in Best American Essays. She teaches creative writing as a professor of English at Northern Arizona University.

This is David Carlin.


David is a writer and creative artist based in Melbourne, Australia. He is the author of The Abyssinian Contortionist (2015), and Our Father Who Wasn’t There (2010), co-author of 100 Atmospheres: Studies in Scale and Wonder (2019), and the editor, with Francesca Rendle-Short, of an anthology of new Asian and Australian writing, The Near and the Far (2016). His award-winning work includes essays, plays, radio features, exhibitions, documentary, and short films; recent projects include the Circus Oz Living Archive and WrICE. He is a professor of creative writing at RMIT University where he co-directs the non/fictionLab.

The place we started writing our book together was Fairhaven beach, near Melbourne, Australia. It is a pretty good place for dreaming up ideas. Not so good for laptops, so we only wrote it in our imaginations at this point. 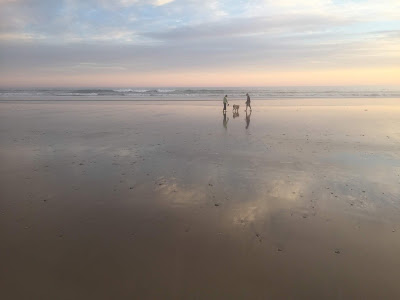 David visited Flagstaff after (or before) one of our reconnaissance missions in Tempe, AZ for the NonfictioNOW conference. We hiked in the woods behind my house. We even went for a run! David wore all white because, in Australia, running is akin to playing tennis. It’s tricky to run in the woods of Northern Arizona. Rocks conspire to trip. Still we ran.  Writing in the forest is harder than running, even though it is, of course, the nature lover’s dream to sit under a big tree and write about the way of the world. Instead, we returned to the house. then showered, then came to my house to conspire on our own. 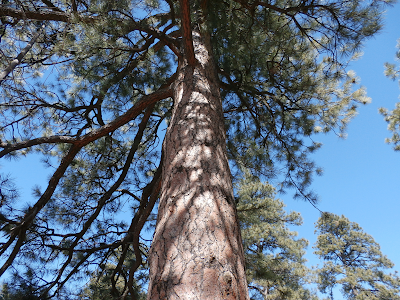 Near Fairhaven beach we are lucky enough to have a small beach house where we could write. The house is on a hill and surrounded by ironbark (eucalypt) trees. This means that one’s writing companions are most likely to be feathered. They look cute, these sulphur-crested cockatoos, but have a penchant for eating wooden railings. He is just waiting til I look away. 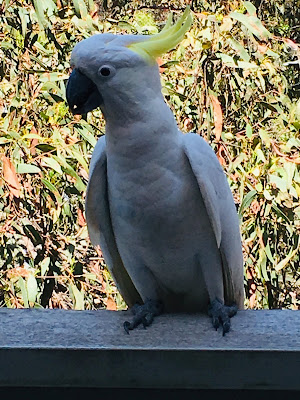 I don’t have an office so I write at the kitchen table. David and I wrote from here the day he visited. For dinner, I grilled branzino--the sea bass that’s pervasive in European restaurants. People don’t think you can get good fish in Flagstaff but we have an airport. Whole Foods and Karma Sushi fly fish in daily. 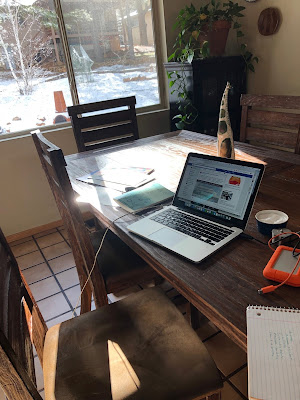 More often I (David) am in the city. We live in inner-city Melbourne. This is the view from outside one of my favourite local cafes, a sometimes writing spot. Looking over at the old milkbar on the corner, which is gradually becoming overgrown with a thicket of graffiti. Down the middle of the street, our beloved Melbourne tram tracks—we are so lucky they never ripped up the tram lines in the postwar frenzy when they thought car travel was the future. 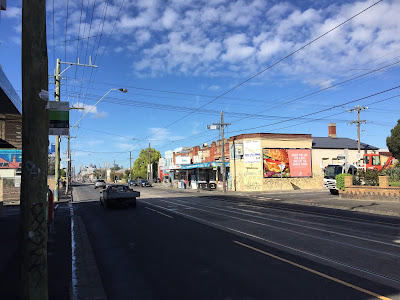 I’ve just received a message that David has arrived in the United States. He is an intrepid traveler. He cured me, when he invited me to give a reading in Melbourne, of long flight fears. Still, in the scheme of things, I’d rather be on my deck, writing in the sunshine than trying to sleep on an airplane. But without airplanes, this book would not exist. 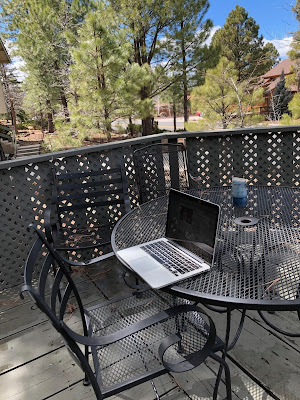 This is my desk at home. Hopefully you can’t read my terrible handwriting. The soft southern light floods in through the window (remember, I am in the Southern Hemisphere!). Outside there is the sound of construction. Cranes all around. New apartments blocks, urban infill. Too much concrete, but soon we will be able to walk to everything, we hope. This is where I sometimes Skype Nicole, and we compare our opposite seasons and opposite times of the day. 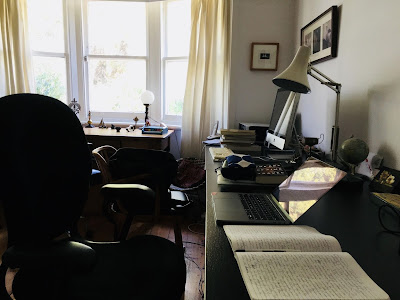 This is my writing chair. When David isn’t visiting, and no one else is visiting, and when I have finished with the tuition waiver assignments and the human resource trainings and the Environmental Certificate curriculum revisions, I sit down to write. 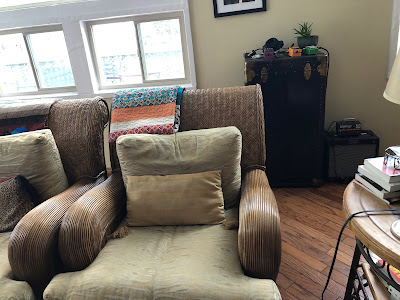 As all writers now know, we are not supposed to sit all the time. Sitting is not good for you. This is a challenge for writers. We are supposed to dream of having those treadmill desks, so we can both be walking along and feverishly writing away, at the same time. I have never actually tried one. We couldn’t fit one in, even if we could afford to buy one. So every now and then, I use my ‘standing desk.’ My standing desk is an old chest of drawers in the hallway. I can write there for a while (until my feet get sore), under the amused (or bemused) eyes of the tin toys on the mantelpiece above, who are always happily racing along up there. 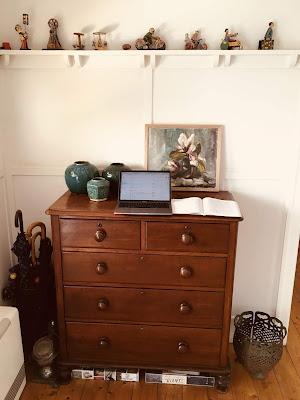 But then, I get company, which is lovely, but makes the writing slow-going. 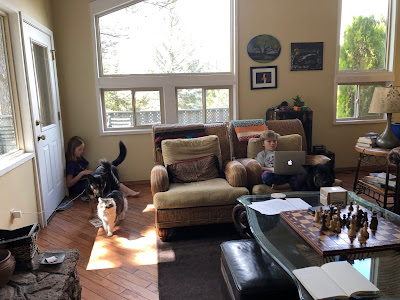 In Melbourne too, there is daytime company for writers. Sometimes we have an adolescent ringtail possum that will wedge itself into a cosy spot for a long siesta. I like to think of it as the local spirit-animal for asking questions. 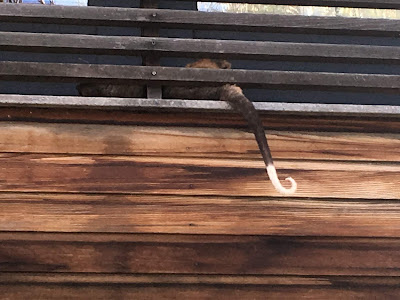