Legs caught in their escaping possibilities, I tried to fly. Hands snared in their groping of air, I thumped back on the ground. Let out a cry of anguish. The cry that accompanies all explorations of limits. That’s my life story in a nutshell. That is the nut that can’t be cracked at the heart of all the books I wrote.

Yes, over twenty of them across genres and disciplines—and sometimes across tongues. And now, Speculate, a collection of microlit co-written with Eugen Bacon.

On edge and on the edge of genre. Looking out to new possibilities and looking in at genre itself, all the better to cross its borders. Suddenly. That’s the heart of Speculate, a conversation between two writers who can neither tolerate boredom nor delimitations.

We were part of a prose poetry chain where we’d post sudden fiction, short shorts and prose poems, riffing off each other’s texts, testing each other’s limits. We noticed that there was a synergy between our entries. Then Eugen, best known for her cross-genre speculative fiction, challenged me to write what turns out to be a speculative dialogue of microlit.

The word ‘microlit’ deliberately blurs the distinction between forms and modes of writing. You will encounter flash fiction and prose poems. You’ll feel the epic drive in lyrical prose and the subliminal thrust of anti-realist prose poems. That’s why we decided against the term ‘sudden fiction’. There is no right or wrong approach to Speculate. It’s a hybrid boundary replete with surprises.

All of my work explores limits: the limits of body, of sanity, of language. My first story, ‘Embabelled’ (1994) was about the limits of language and sanity. ‘Magic’ (1997) recounted the experience of giving birth and relinquishing control over the body. My first poem, ‘Grief’ (1997), was about losing a child, and thereby testing symbolic boundaries. The novel, The Book of Elsa (2000), is a book of autogenesis, where the main character recreates herself in ‘the land of furphies’ and eventually gives birth to a child and to the book she has just written

Comparatively, there may be more restraint in Speculate because its intertextuality is embedded in a dialogue between two authors who listen to and for each other.

Perhaps this is why a number of the pieces are dreamlike, recounting snatches of strange journeys, memories of travel which harken back to the journey of discovery that is the writing process. Perhaps this is why others are sharp as cut diamonds glittering by your hand.

Look out for weird conjunctions of events, jazz, rock’n roll, alliterations, anaphoric repetitions. Expect the use of the second-person address as we tango.

Here cages are seas or creeks and everything is in a liquid, changeable state. Dreams are poems and names are paintings and seas and creaks become sculptures aflame.

Microlit resists pinning down. Embrace it. Don’t box it. 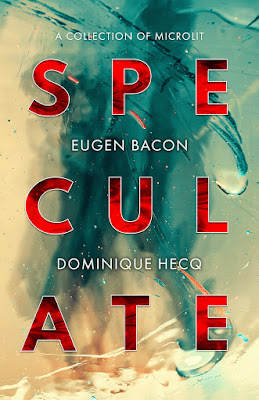 From what began as a dialog between two adventurous writers curious about the shape-shifter called a prose poem comes a stunning collection that is a disruption of language—a provocation. Speculate is a hybrid of speculative poetry and flash fiction, thrumming in a pulse of jouissance and intensity that chases the impossible.

Dominique Hecq grew up in the French-speaking part of Belgium. She now lives in Melbourne. Her works include a novel, three collections of stories and ten books of poetry. Hecq’s poems and stories have been widely published in anthologies and journals. Often experimental, her work explores love, loss, exile and the possibilities of language. Kaosmos and Tracks (2020) are her latest books. Among other awards such as the Melbourne Fringe Festival Award, the Woorilla Prize for fiction, the Martha Richardson Medal for Poetry, and the New England Poetry Prize, Hecq is a recipient of the 2018 International Best Poets Prize.

Neither a kitchen nor a sky

Her heart is a room full of photographs and pillows wafting around rehearsing melancholy and reinstating torment. But there is still no word, just somber silence in the floating photographs and neglected pillows cartwheeling like burnt toast past the IKEA blender and microwave in a fairy tale of space that does not involve breathing.

His heart smells of burnt toast. If you look closely, you will see a paisley design—the sort found as all-over design for an IKEA bedspread. The main motif and the background of ferns are done with pure (that is unmixed) colors: just red (turkey) and black (jet) to conjure up the marriage of blood and vegemite, the staples of his diet, as well as his sign in the Chinese horoscope. Yes: he is a tiger. Enter the chambers of his heart at your peril. Don’t say you were not warned. He grinds his teeth.

Posted by TNBBC Super Mod at 5:30 AM No comments: