TNBBC is proud to be partnering with Author Sarah McCoy
for next month's Author/Reader Discussion!

In April, we will be featuring her second novel
The Baker's Daughter 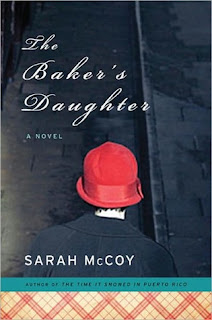 In order to stimulate discussion,
we will be giving away 10 domestic copies of the novel
(many thanks to Crown Publishing!)

"In 1945, Elsie Schmidt was a naïve teenager, as eager for her first sip of champagne as she was for her first kiss. But in the waning days of the Nazi empire, with food scarce and fears of sedition mounting, even the private yearnings of teenage girls were subject to suspicion and suppression. Elsie’s courtship by Josef Hub, a rising star in the Army of the Third Reich, has insulated her and her family from the terror and desperation overtaking her country. So when an escaped Jewish boy arrives on Elsie’s doorstep in the dead of night on Christmas Eve, Elsie understands that opening the door puts all she loves in danger.

Sixty years later, in El Paso, Texas, Reba Adams is trying to file a feel-good Christmas piece for the local magazine. Reba is a rolling stone, perpetually on the run from memories of a turbulent childhood, but she’s been in El Paso long enough to get a full-time job and a full-time fiancé, Riki Chavez. Riki, an agent with the U.S. Border Patrol, finds comfort in strict rules and regulations, whereas Reba knows that in every good story, lines will be blurred.

Reba's latest assignment has brought her to the shop of an elderly baker across town. The interview should take a few hours at most, but the owner of Elsie's German Bakery is no easy subject. Elsie keeps turning the tables on Reba, and Reba finds herself returning to the bakery again and again, anxious to find the heart of the story. For Elsie, Reba's questions have been a stinging reminder of darker times: her life in Germany during that last bleak year of WWII. And as Elsie, Reba, and Riki's lives become more intertwined, all are forced to confront the uncomfortable truths of the past and seek out the courage to forgive."

This contest will run through March 9th.
Winners will be announced here and via email on March 10th.

*If you are chosen as a winner, by accepting the copy you are agreeing to read the book and join the group discussion at TNBBC on Goodreads (the thread for the discussion will be emailed to you before March 1st).

3 - You must leave me a way to contact you (email is preferred). AND you must be a resident of the US!!!!

Good luck!
Posted by TNBBC Super Mod at 5:30 AM