Audioreview: All My Friends Are Superheroes 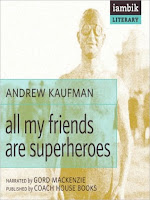 What would the world look like to a guy with very low self-esteem, who views himself as just your regular-everyday-kind-of-Joe with no redeemable qualities or personality quirks to make him stand out in the crowd? Perhaps it would look something like "All My Friends are Superheroes"!

Tom is normal. There is nothing special about Tom. The only special thing about Tom is his wife, The Perfectionist. And the fact that she cannot see him. Because to her, Tom is invisible. Tom is not actually invisible, though. All of his friends can see him. All of his friends are superheroes, like his wife. They have tried to tell The Perfectionist that Tom is not invisible. But she remains convinced that Tom has left her, she hasn't seen him since the night of their wedding. And today she is flying to Vancouver to put the past 6 months of waiting for Tom to return behind her. If Tom cannot find a way to get her to see him before the plane lands, he will lose her forever.

As you read through the book, you quickly begin to realize that Tom's friends are not actually superheroes, not in the true sense of the word. They aren't running around like Batman or Superman or Wonder Woman trying to save the world from evil villians. But they do have interesting personality traits and odd habits that separate them from everyone else. Take his very own wife, The Perfectionist, for example. Her "superpower" is her need to organize. She will attempt to organize everything. Your hair, the garbage, even the falling snow. Then there is "The Couch Surfer", who has the uncanny ability to lounge around on his friends couches, roaming from couch to couch in a wonderful jobless stupor; "The Impossible Man" was named for his realization that trying things like building underwater fires and walking on water are simply impossible; and "Wild Mood Swinger" who tends to exhibit extremely high highs and terribly low lows, typically all within one conversation.

Tell me this isn't the coolest friggen thing you've ever heard of?! Imagine if everyone you knew were named for their most obvious trait. If you were to name yourself after your most outstanding quality/quirk, what would your superhero name be? In my case, I suppose I could don the name "Indie Girl" - forever reading and reviewing independent novels, never seen without a copy of a worn and torn indie book in her hand, always breathing quotes and concepts found within their pages...

This little book is full of awesome. The short, brisk sentences are practically painful, they're so perfect. The characters are emotionally intense. It's  maudlin and mopey and yet, at the same time, brimming with this incredible sense of hope.

I won the book in a giveaway contest held by Lit Drift many, many months ago and kept meaning to pick it up and read it. And for whatever reason, it just never made it off the pile of unread books into my hand. Then, a few weeks ago, I saw that Iambik had published it as an audiobook and snagged a copy for my commute.

The book clocks in at mere 106 pages. The audio ran just over 2 hours. Never in my life have I ever wished for an audiobook to be longer... yet there I was, nearly howling when narrator Gordon Mackenzie announced that we were at the end of the recording. Of all the Iambik books I've listened to, All My Friends are Superheroes is by far their best. I have yet to find a more perfect match between narrator and novel in their catalog. I adored Gordon's Canadian accent and felt his pacing was spot on. He became Tom.

I'm putting my Next Best Book stamp of approval on this one. Sure, I'm coming to it a little bit late - ok, almost 10 years late - but better late than never! Don't put this one off any longer... get out there and get listening to this. You'll be by to thank me later.