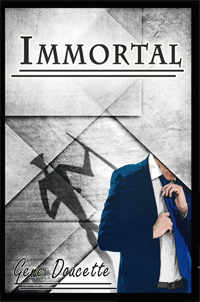 I am delighted to announce the re-release of Gene Doucette's debut novel Immortal. It's not every day that an author gets the opportunity to see his book through a second edit, outfitted with a new cover, and released under a new publisher - The Writer's Coffee Shop! Dare I say that Immortal is truly... immortal now?

Gene and I had the pleasure of a face to face meeting (the details of which can be found below in Gene's guest post) this past fall at the Indie Book Event. Prior to this, I had read and reviewed - and was even blurbed in - the first edition of Immortal. Prior to that, Gene was given a good ole fashioned TNBBC schooling in the do's and don'ts of pitching your novel on Goodreads. Oh how far we've come, huh Gene?

Today, to start things off with a BANG!, I thought I would have Gene talk to you about the pros and cons of indie publishing. Consider this an On "Being Indie" Special Second Release edition....

So for this, the first leg of the Immortal (second edition) blog tour, Lori asked me to write a guest blog post on any of the following subjects: What being an Indie published author means to me; why I publish Indies; why people should read and support Indies; what the partnership between an Indie publisher and an author looks like.

This is, of course, a trap.

Lori and I met face-to-face this summer for the Indie Book Event in New York City at a time when I was trying to interest people in buying the first edition of Immortal and she was trying to act like a charming and informative book reviewer / blogger.  Only one of us succeeded.

At this event I was asked to take the microphone for a while and discuss my experiences as an Indie author, which was a tremendous mistake for all involved, as I proceeded to articulate the following point: Why in the hell would anybody willingly choose to publish Indie?  I then spent the next twenty minutes depressing everyone in earshot in what turned out to be a droning monotone that resulted in my being nicknamed Eeyore for the remainder of the day.

Anyway.  I had a point that day that was unfortunately lost in the dark pit of despair I brought to the stage with me.

But first, here are some truths about Indie publishing as compared to the larger publishing houses:

These are all good things.  Here are some bad things:

·         Creative control over the marketing of your book may mean you’re the one doing all of the actual marketing
·         Niche/small market publishers go out of business all the time
·         You will have to live with limited distribution, and get used to saying, “no you can’t find it in the bookstore, but it’s available online”
·         You won’t, in all likelihood, be quitting that day job

Another question Lori asked me to consider fielding was, “why a second release of Immortal?” and the answer to this question might give you a better idea of where I’m coming from.

As you might know, Immortal was originally released in October of 2010.  That first edition was with a brand-new publishing company consisting of one full time employee and one unnamed financier.  The understanding was that additional employees would soon be added to help sell, market, edit, web design, and all of the other things a publishing company is supposed to be able to do.

A year later, there was still only one employee.  What marketing had been done for Immortal was handled by me entirely, as was the ebook formatting for both Amazon and Smashwords editions.  The cover was designed by an artist I had found, the press releases were commissioned by me, the only media page on the Internet for the book was on my website because the publisher had never put up a site.  And so on.

And after that year, it was time for me to roll out the second book (Hellenic Immortal) before the people who’d read the first forgot about me entirely.  But it was clear my publisher wasn’t going to be able to follow through on any of the promises—staff, marketing, etc.—to handle the next book.

So I found another publisher for Hellenic Immortal, and then notified the publisher of Immortal, and asked: “would it be possible to re-obtain the rights to Immortal so my new publisher can release it as well?”  After all, the best way to sell a book is to sell the next book, and I wanted one company to be able to promote both.  I was expecting a cost quote in response.  What I got instead was, “the rights are yours.”

And that’s how we got here, with a new edition rolling out next week.

Back to my point

When I questioned why anybody would willingly choose publishing Indie given the option of instead going with a large house, I was speaking with the weight of a year’s worth of rescinded promises and urgent, exhausting self-promotion on my shoulders.  And maybe that was unfair to Indie publishing in general, because mine was an experience not likely to be recreated.

That said, I stand by the basic assertion that no new author I can think of would turn down a contract with, say, Random House, to go with the niche company down the street.  But this point obscures the more pertinent one: most Indie authors aren’t going to get published by a Random House because they don’t write things Random House would want to publish.

This is neither a dig on the big houses nor a commentary on your writing, or mine.  It’s simply that the more money there is at stake, the more important a “sure thing” becomes.  For any publisher, it’s not enough that a book is well written; it has to be sellable.  In other words, a large publisher devoting significant funds and resources to selling a book has more to lose than an independent publisher with limited funds and fewer resources.

So if you’ve put together a novel that has genre problems, as I did, the publisher that’s most likely to say, “it’s well written; we’ll figure out how to sell it later” is going to be an Indie publisher.  And if the publisher that said that had instead been one of the larger houses?  I would have jumped at it.  And I think so would you.

Now for the fun part!
To celebrate it's re-release
We are giving away one copy of  the Immortal eBook.

Simply comment below to be considered.
Giveaway ends March 14th. 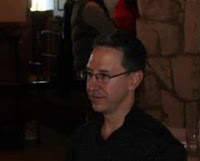