The Lucky Man Re-Release and Giveaway 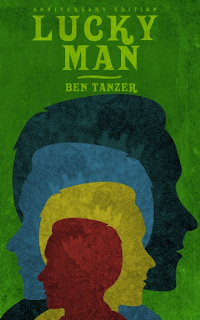 How many authors can say that they were able to give their debut novel new life around the very day that it turned 5 years old?! By my count, only one. The Tanzer-man can!

Initially published by Manx Media exactly 5 years ago today, the only way you can get your hands on an original printing is by buying it used. It's been out of print for quite awhile, which is why I was thrilled to near-tears when I heard that Artistically Declined Press had picked it up with their new imprint Antler Editions. (ADP's founder and publisher, Ryan W Bradley, designed the gorgeous anniversary cover you see up above.) It's anticipated re-release is scheduled for sometime this April. You can pre-order here.

I've read just about everything Ben Tanzer has put out, which is saying a lot because the dude is like a literary machine, cranking out amazing stories every... what... 2.8 seconds? It's simply not human. When I think of Ben, I used to picture a man sitting at a table, a week's worth of beard and beaded sweat covering his face, scratching a pen furiously, feverishly, over sheet after sheet of paper, flipping them violently to the side as they are filled up with the words that have been beamed down from his brain through his arm into his hand and out of those fingers wrapped so tightly around the pen that they are bruised and blistering....

I've since had the pleasure of meeting Ben in the flesh and blood in NYC a few months ago, when he and Greg Olear did a reading at the KGB Bar, and now know that he is really nothing like that. Or if he is, he hides it well when out in public!

Ben and I have been online pals for awhile, so it fills me with an incredible amount of joy to help him celebrate Lucky Man's new lease on life. We've been obsessively supporting each other's efforts for a few years now. Case in point - the 2010 interview when I interviewed Ben after reading Repetition Patterns; the previously unpublished short story he submitted to our Tell Me a Story series, which was then published (with acknowledgments) in The Party Pit, his companion guide to You Can Make Him Like You. Ok, so you get the gist of it, yes?

I'm especially excited about this particular release, not just because it's Lucky Man's second chance at cementing a cult readership but also because it's bringing Ben back together with Ryan and ADP. No author or publisher have ever been better suited for one another than these two!

Alright, yes, I know... I am getting dangerously close to gushy. So let me reign this post in by sharing a very special giveaway with you.

In order to properly kickoff the Lucky Man re-release,
we have cool package for one very lucky winner....

One set of the following titles.... SIGNED by Ben Tanzer

Tell us why these copies should go to you!
Winner will be announced March 21st.