Laura Ellen Scott on "Being Indie" 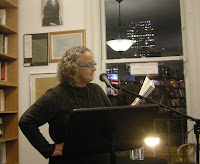 Meet Laura Ellen Scott. I had the pleasure of hanging out with Laura during the Scranton Pages and Places event a few months ago. She was participating on a panel or two there, and stopped by a coffee shop to chat about her book.


Her novel Death Wishing, released through Ig Publishing, might just be on the shelves of your local independent bookseller. Curio is up there, in the sky. If you'd like to have some fun, visit The Wish Tank consider contributing a wish of your own.

Let me start by apologizing for the narcissistic, rambling column you are about to read, but I happen to be an indie gal who had a heck of an indie year in 2011, and I’m still on trying to make sense of my good fortune. In January Uncanny Valley Press offered my chapbook Curio as their debut publication and made it available online and as a free ebook. October saw the release of my first novel Death Wishing, by Brooklyn-based independent Ig Publishing, and over the past few months I’ve been zigzagging the country to support it by giving readings at independent books stores, festivals, galleries, and bars. To call the experience a dream come true is spot on.

Because we’re indie, we need to make noise the cheap way, so my novel was offered as a free Kindle download on Amazon for a limited time. People like free stuff, but it was still trippy to see my book hold the #1 spot in the Top 100 Free Bestsellers in Literary Fiction list for several days, with A Tale of Two Cities and A Scarlet Letter ranking 2nd and 3rd. In this context, the term “Literary” confuses me as much as “Bestseller.” My training is in literary writing, but my fiction is escapist: Curio is a collection of very short horror stories, and Death Wishing is a comic fantasy about dying wishes coming true in . Sometimes it seems like the only thing standing between me and MASSIVE COMMERCIAL SUCCESS is my sticky, big L prose style, and if I was smart I’d learn how to write plain. Or, I could stay fancy-pantsed and strike it rich by writing soulful/painful books about kids. But neither of those things is going to happen, so it’s lucky for me that indie is an option--a legitimate one that seems to be picking up steam. Without indie culture, I’d be as doomed as the Flying Dutchman, unable to find harbor in commercial or literary ports.

There were a few objections to the Kindle promotion, mainly centered around the fear that such giveaways chipped away at the idea of the novel as a genuine commodity, but I was more moved by the people who contacted me to say they were grateful for a freebee that was new, non-vampire-oriented, and 100% free of Amish romance.* Which is not to say that during the giveaway, Death Wishing was like a big fish in a little pond, but it probably looked like a purple fish in a pond of orange ones. There may be a moment right now for artful fiction, especially that which doesn’t fit into easy market categories, to find readers. That has to be worth something.

By March my novel will be six months old—well past its sell by date I’ve been told, but I’ll still be on the road, working it. At the 2012 Tennessee Williams/New Orleans Literary Festival I’ll be on a panel with three other novelists, each of whom is affiliated with major publishers: Ellen Baker (I Gave My Heart to Know This/Random House), Jessica Maria Tuccelli (Glow/Viking), and . . . Jesmyn Ward (Salvage the Bones/Bloomsbury USA). I probably don’t have to tell you that  Salvage the Bones won the 2011 National Book Award. No kidding, it’s the three of them and little indie me. The panel is titled “Women To Watch,” and I bet Jesmyn, Ellen, and Jessica will be watching me pretty closely, if only to make sure I don’t swipe the silverware. Perhaps I am merely reaping the natural rewards of a lifetime of writing and caring about writing, but I have to wonder how I scored my spot on that panel. I’m not complaining, mind you. Just wondering. Maybe, in this Wild West economy of letters, we are we all indie now.


*By the way, there should be a way to categorize books by what they don’t contain--because I know a lot more about what I don’t want than what I do want.