It's the return of the Indie Book Buzz here at TNBBC. Over the next few weeks, we will be inviting members of the indie publishing houses to share which of their upcoming 2012 releases they are most excited about!

Three Ways of the Saw is a gritty, blue-collar collection of stories that puts your face right up to the window of real life, with all its bitter humor and complexities, and doesn’t let you look away.  I usually lean towards a novel over a short story collection, but this is one unlike any other I’ve seen. The first section follows a self-destructive outcast and only son of a blue-collar Irish Catholic family, the second zeroes in on some dubious characters dwelling on the fringe of society, and the third plunges the depths of longing and loss. I can’t put it any better than Cathy Day (The Circus in Winter) when she said, “Three Ways of the Saw is a collection that delivers. One to the Gut. One to the Head. One to the Heart. This book knocked me out.”

Mina Koblitz has never thought twice about her immigrant German grandfather or his brief career as a film director, which her family has shrouded in mystery. But when the reels of his first-ever silent film appear on her doorstep, she has to know more.  Leaving her feverish new husband in a hospital bed, Mina flies to Germany to discover the legacy of her grandfather’s filmmaking under the Nazi party and ends up on a mission to redeem his name and life’s work. At its heart, this book asks us what true art is, what it’s capable of and what is worth sacrificing for its sake. If you have an interest in history (especially the Weimar Republic), film, propaganda, or have ever wondered at how little you know those people you call your family, I can’t recommend this book strongly enough. 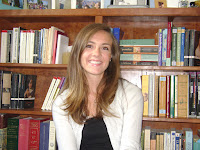 Libby O’Neill is Assistant Editor at Atticus Books and the Managing Editor of their weekly online journal, Atticus Review.  Favorite authors range from Charles Dickens to Brady Udall and she can’t resist a good dose of sarcasm.  She’ll take strong coffee and big dogs over tea and cats any day of the week.

How do I love Atticus Books? Let me count the ways... Nah, I suppose I don't really need to when you look at the books they are putting out in 2012.. huh? Go on. You know you want 'em too!

So what do you think guys? See anything that catches your eye? Which of these books are you most excited to see release? Help TNBBC and Atticus Books spread the buzz about these books by sharing this post with others!
Posted by TNBBC Super Mod at 6:30 AM