I am really excited to bring you guys this next Author/Reader Discussion Giveaway!!

This one is a prize pack  -
Jason Heller's upcoming debut novel Taft 2012,
along with a Taft 2012 campaign poster and pin!! 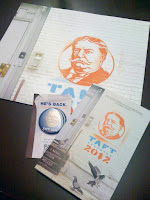 In order to stimulate discussion,
Quirk Books has agreed to give away 5 copies to US residents
(sorry guys, no international this time!)

Curious about the book, aren't you? Here's the Goodreads description:

HE'S BACK. AND HE'S THE BIGGEST THING IN POLITICS.

He is the perfect presidential candidate. Conservatives love his hard-hitting Republican résumé. Liberals love his peaceful, progressive practicality. The media can’t get enough of his larger-than-life personality. And all the American people love that he’s an honest, hard-working man who tells it like it is.

There’s just one problem. He is William Howard Taft . . . and he was already president a hundred years ago. So what on earth is he doing alive and well and considering a running mate in 2012?

A most extraordinary satire, Jason Heller’s debut novel follows the strange new life of a presidential Rip Van Winkle: a man who never even wanted the White House in the first place, yet finds himself hurtling toward it once more—this time, through the media-fueled madness of 21st-century America.

While you're deciding, check out the campaign video:

This contest will run through December 21st.
Winners will be announced here and via email on December 22nd.

1 - Comment here by telling us which of our past presidents you would vote back into office (dead or alive) and why.

*If you are chosen as a winner, by accepting the copy you are agreeing to read the book and join the group discussion at TNBBC on Goodreads (the thread for the discussion will be emailed to you before January 15th).

3 - You must leave me a way to contact you (email is preferred).

Good luck!
Posted by TNBBC Super Mod at 6:30 AM