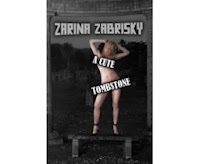 A Cute Tombstone by Zarina Zabrisky

This book definitely has shelf appeal: put it facing out on the stands in a bookstore and people would buy it for curiosity alone. On the cover stands a blond woman. Her hair looks wet or greasy and partially covers her face, but she is mid-dance in high heels on one of those tombstone benches, the kind designed so you can sit and chat with your dead relatives. Did I mention she’s naked? I’m not sure if this picture is of Zabrisky, but it could be. The publisher noted that the "naked' cover of the book is the limited edition version.

There are only two pieces, a short poem called “The Hat” and the main story. Before the poem is a beautiful black-and-white picture of a woman in a giant, fluffy black hat with bows on it. The woman herself is quite attractive and put together. In the poem, the hat first represents love, but the hat might disintegrate or be the woman herself (without a head) or be put on a man’s head or the woman’s head (it fits at first but then it doesn’t) until we’re uncertain what the hat means, as if there cannot be love because we don’t know what it means.

Following the poem is the long story “A Cute Tombstone,” preceded by another black-and-white picture of a woman in simple clothes. Her portrait is beautiful, but comes from the era when smiles in pictures were not welcome, so she looks unhappy or mournful instead. In this title story, a Russian woman who moved to the U.S. 11 years prior gets the call that her mother has died in Russia. The narrator reflects on the ease of death in the U.S. and that shoppers at Costco can sample nuts, buy Cheerios, or purchase a coffin. Before the mother died, Russia represented crazy, decadent summers of parties and friends for the narrator, but when she returns to make the funeral arrangements, she can’t help but note that everyone winks, the traditions try to overpower the individual’s wants, and there are always smells in the air that are unfamiliar to Americans: fish pies, vodka, raspberry marmalade. In this way, Zabrisky produces the experiences of a Russian through the lens of an American.

American readers see what’s unusual, and the details are enough to make the story’s setting and characters vividly “other.” When the narrator heads to a funeral portrait business to get her mother’s photo enlarged to put next to the closed casket, she notices the displays of others’ funeral portraits: “I imagine their lives: At six, they probably played with German trains and tanks—war souvenirs. At eighteen they were getting married in dresses made from curtains, airy veils and ill-fitted military uniforms—the women pregnant already.”

Zabrisky’s story is smooth and melodious. It’s important to read the punctuation carefully, the words slowly, to get the full poetic effect. A sentence may begin positively and end in a new place. You won’t be lost; she’ll lead you there, but if you read too fast, you’ll find you’re trying to gulp down your specially-made meal.


Bio: Melanie Page is a MFA graduate, adjunct instructor, and recent founder of Grab the Lapels, a site that only reviews books written by women (www.grabthelapels.weebly.com).
Posted by TNBBC Super Mod at 8:27 PM