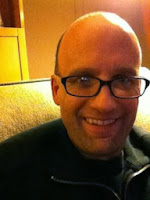 This is Pete Anderson.

Peter's debut novella, Wheatyard, was published this year by Kuboa Press. His short stories have appeared in many fine venues, including Storyglossia, THE2NDHAND, RAGAD, Midwestern Gothic and the collections Daddy Cool: An Anthology of Writing by Fathers For & About Kids (Artistically Declined Press, 2013) and On the Clock: Contemporary Short Stories of Work (Bottom Dog Press, 2010). A financial professional by trade, he writes fiction to ease the crushing monotony of corporate life. He lives and writes in Joliet, Illinois. 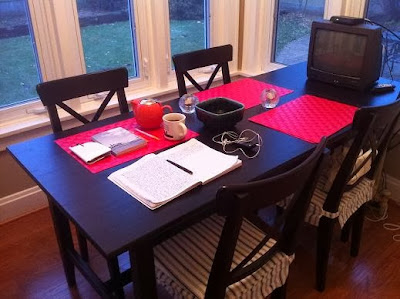 When I write - which isn't nearly often enough - this is where it happens: the nook off our kitchen, which my family calls "the little eating room." I write here on weekend mornings, after I get up at five a.m. to feed the cat. (His tiny feline mind makes no distinction between weekdays and weekends - he's used to eating at five during the week, when I'm up early before heading off for work, so he expects to eat then on weekends too, and is very vocal about it. Even if I'd rather sleep.) So after he's fed and I've had my own breakfast, I brew a pot of tea and settle down to write.
The room faces our backyard, and early on it's still pitch-black outside and I can't see much of anything other than maybe the neighbor's garage light or the overhead light down the alley. This limited view is probably good for me, since it limits any potential distractions as I'm trying to ease back into my narrative. Later, by the time the sun comes up and the yard becomes visible, I'm fairly well immersed in the writing and will only take an occasional glance around while pausing to think something through. By this time of year, in November, most of the vegetation is gone and the yard is all muted browns and grays, and thus even less of a distraction than during the summer. By the time my family wakes up, at seven or eight, I've done enough writing and can get on with the rest of my day.
Since this room is where we often eat dinner and isn't dedicated solely to my writing, there's no writer-clutter as I only bring in the bare essentials shown in the photo: composition book; writing pen (a lovely handcarved wooden tool that my wife gave me as a birthday present early in our relationship, before we were even married); a Field Notes pad in which I've jotted down ideas during the previous week; a journal in which I record my thoughts on how the writing is going, along with observations on what I'm currently reading and its relevance to my writing; the pot of warming chai tea and coffee mug from community radio station WEFT in Champaign, Illinois ("1985 Power Increase Marathon"); and my old-school iPod nano. For writing I prefer music on the iPod instead of my iPhone, since the iPod is completely offline; although my iPhone is otherwise my nearly constant companion, I intentionally leave it in the kitchen during my writing sessions so I won't have the temptation of the Internet. And if you're wondering about the TV at the end of the table: yes, my family watches TV during dinner, but no, I leave it off while writing. I have enough trouble being a productive writer as it is, even without the Internet or cable TV. When the writing is done for the day, I pack up everything and clear out.
Although this room has done well for my writing needs, we do have a spare bedroom upstairs, a corner of which might someday become my study. I already have a desk and filing cabinet there, but for years I've been trying to find one of those classic old wooden desk chairs with the curved top, spindled back and swiveling iron base, the kind you might see pulled up to a rolltop desk in some old-fashioned office. If I finally find a chair that like in good condition, the bedroom might eventually become my new writing space. However, if I do make the move, as much as I'll enjoy having a writing space all to myself, I'll also miss the simple minimalism of the little eating room.