JA Tyler's Would You Rather


JA Tyler's
Would You Rather 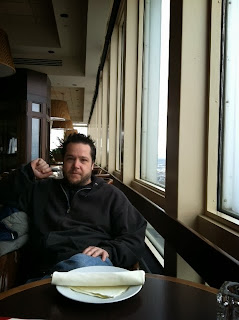 Feet, definitely. Mostly because I drink coffee while I write, so my tongue isn’t available. Also, I’m a bit of a germaphobe, so touching my tongue to the keyboard is a sickening proposition.

One giant bestseller, assuming it would buy me a house. That’d be pretty sweet. Plus, I’m always going to write, regardless of success, so might as well go big at least once, right?

Well known now, please. What good is anything after death? I don’t have faith in that.

I’d go without. Having to start every sentence with a conjunction sounds like a constraint that might give me bouts of depression and/or diarrhea.

Word tattoos rule. Plus, have your heard audio books? Most sound like they are recorded by a gin-soaked community theater reject eager to exonerate his own voice. No thanks.

Jokingly, compromise everything. Seriously, belief in what you write is ten thousand times more important than readership or success.

You can kill a character you hate.

Blood. It would look startling, stark, and it isn’t covered in hair and freckles and the rest. Look really closely at someone’s skin sometime. Super gross for the most part.

I’m already a character in a novel I’ve written. More than one probably. And several of my characters in every novel are based on real life, having already enacted way more than the horrors I put them through. Shit. Did I answer that one?

I want to write a novel called “Sleepless Esteemed Freewheeler” so, you know.

Wow, both of those sound great. I like the word “bloviate” though, so I’ll take that.

Umm, I don’t talk a whole lot, except to my wife and in my classrooms, and both of those instances would probably appreciate some haiku-speak truncating my thoughts.

Would you rather be stuck on an island with only the 50 Shades Series or only a series written in a language you can't read?

50 Shades. Not sure why. Maybe the domination aspect? Again, not sure why.

Jimmy James, the director of WYNX, said there is no such thing as “bad publicity.”

That would make for a pretty righteous Twitter feed. And, a narration of every move I make would highlight my OCD in a terrible way. My head would explode.

I could give up my computer in an instant. Pens are beautiful.

Tippy-toes. Have you ever tried to get good pressure on the page when you are holding it up in the air with your other hand? What a cluster that is.

If no one showed up, I’d gladly read naked.

And here is JA's response to MP Johnson's question from last week:

My bowels are an active plot, and my bowling average blows, so I'd go the butt instead of the balls route.

Would you rather have rampant misspellings in your obituary or
a negative New York Times review of your book?

J. A. Tyler is the author of the poetry collection Variations of a Brother War, the collaborative art / text experiment No One Told Me I Was Going to Disappear, co-authored with John Dermot Woods, and Colony Collapse, a poetic psalm. His novel The Zoo, a Going is forthcoming from Dzanc Books. He teaches theater and film in Colorado.