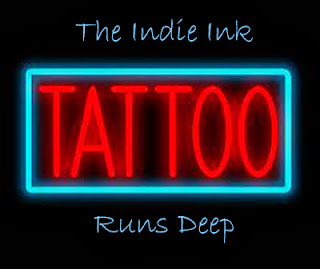 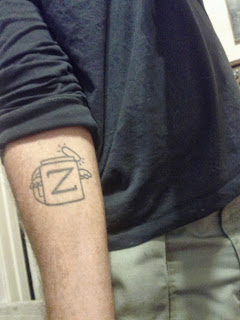 I’ve got tattoos all over my back, legs and arms, but this one stays alone. It’s in honor of my friend Jonny Z, who died in Richmond, Virginia in May 2007. Jonny was an artist, an activist, a beast of a drummer, a member of an elite club called Roommates I’d Live With Again, and the kindest person I knew. Maybe too kind. Like, “Do you have to keep letting your smelly friend live on our couch?” kind. Like, Force you to examine how you interact with people kind.

I tend to be a loner, kinda self-absorbed. Seeing the way that Jonny brought people together showed me that it was possible to trust others, to work with them instead of separating myself. It was a big help in those punkhouse living situations. You can’t be alone then. It’s impossible. So go with the flow.

You’ll see a lot of Richmond old heads with Z tattoos in honor of Jonny. He was a huge part of the city’s creative community, and immediately became a folk hero upon passing, “Be Like Jonny Z” a credo.
This tattoo is of a coffee travel mug like Jonny always carried, but with angel wings and a halo – crooked because it’s having fun. Hope he is too.

This post is part of the Zero Fade Blog Tour, where different sites cover the book on the days surrounding its publication. The entire itinerary is listed here: http://www.curbsidesplendor.com/curbside/blog/zero-fade-blog-tour
Posted by TNBBC Super Mod at 5:00 AM