Mason Johnson's Would You Rather

Mason Johnson's
Would You Rather 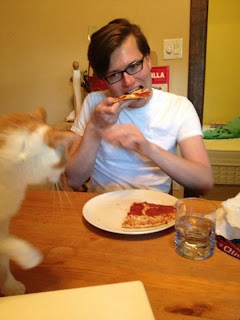 Would you rather write an entire book with your feet or with your tongue?
Tongue. I’d dictate it to someone. If anyone called me out as a cheat, I’d stab ‘em with a broken bottle.

Would you rather have one giant bestseller or a long string of moderate sellers?
Which would obtain me the better twitter following? Probably the giant bestseller. I think I’d go with that.

Would you rather write a book without using conjunctions or have every sentence of your book begin with one?
I’m a big abuser of conjunctions. So if I were able to magically break the habit, I’d be a happy man.

Would you rather have every word of your favorite novel tattooed on your skin or always playing as an audio in the background for the rest of your life?
Both. I’m going to go with both.

Would you rather write a book you truly believe in and have no one read it or write a crappy book that comprises everything you believe in and have it become an overnight success?
If I could somehow sustain myself writing and never showing anyone, I would. Though this would you rather says nothing about sustaining yourself. Still, it seems really to be able to just write and not have to show anyone ever again. Trying to become published takes up so much time – time that could be better spent – that I would almost rather not have to try at all. I donno.

Would you rather use your skin as paper or your blood as ink?
Blood as ink seems wiser, assuming you’re economical with it.

Would you rather become a character in your novel or have your characters escape the page and reenact the novel in real life?
I’d make Kelly LeBrock a character in a novel so I could reenact Weird Science.

Would you rather have schools teach your book or ban your book?
Ban it! Think of the press!

Would you rather be forced to listen to Ayn Rand bloviate for an hour or be hit on by an angry Dylan Thomas?
I’m really good at taking a hit. I’m talented at very few things. I mean, I’m not good at writing, I just spend a lot of time doing it. I have a natural talent for getting hit though. For example: I can get punched in the face over and over and over, and nothing. Most people would fall when they feel the cartilage in their nose being flattened – not me.

What was the question?

Would you rather be reduced to speaking only in haiku or be capable of only writing in haiku?
Speaking in Haiku. I’d obviously be forced to become a wandering samurai, which I was going to do anyway.

Would you rather be stuck on an island with only the 50 Shades Series or a series in a language you couldn't read?
I'd want to be stuck with whatever series has the most books and is the most buoyant. Though, I would like to add, trash or not, 50 Shades of Grey is likely to, uh, keep you better company at night than, you know, most "good" books.

Would you rather critics rip your book apart publicly or never talk about it at all?
Publicly. Again: free press!

Would you rather have everything you think automatically appear on your Twitter feed or have a voice in your head narrate your every move?
I already have a voice in my head narrating my every move. But question about the Twitter-thought: would it also post mental images? That makes it simultaneously more tantalizing and scary at the same time.

Would you rather give up your computer or pens and paper?
Pens and paper. Between my horrible handwriting and the fact that I’ve hurt my writing hand a bunch of times, making it slightly painful to write for long lengths of time, makes this an easy one.

Would you rather write an entire novel standing on your tippy-toes or laying down flat on your back?
No contest: flat on my back.

Would you rather read naked in front of a packed room or have no one show up to your reading?
Read naked. I didn’t even read my other choice. Naked is definitely better than whatever else was written.

Would you rather read a book that is written poorly but has an excellent story, or read one with weak content but is written well?
Excellent story! Anyone can learn the mechanics ‘n shit; give me a natural born story slinger.

And here is Mason's answer to the question David David Katzman asked him last week:

If you were a body builder, would you rather do curls with Infinite Jest or In Search of Lost Time?
I do curls, and all exercises, in the mirror so I can watch myself. Since Infinite Jest seems to have a better design visually, I'll have to go with that. You won't find me reading the damn thing though!

Mason Johnson is a writer from Chicago who currently works full time writing and editing articles for CBS. You can find his fiction at themasonjohnson.com. Also, he pets all the cats.