As Marketing Director for CCLaP, I search the internet high and low for independent bookstores that our books would be a perfect match for. In the overwhelming sea of "noes", a handful of lovely shops agreed to stock our titles on consignment. This mini-series was designed to introduce you to the amazing bookstores that are carrying our books, and also, more-so, as a way to thank these wonderful book sellers for opening their doors to us and welcoming our babies onto their shelves. Go. Meet. Support. Shop!

Our inaugural bookstore: Quimby's, who not only carries our titles but also plays host to many of our CCLaP author readings! Here's Liz from Quimby's to tell you all about the store:

Quimby's is an independently owned bookstore that sells independently-published and small press books, comics, zines and ephemera. We favor the unusual, the aberrant, the saucy and the lowbrow.  It was founded on September 15th, 1991, Steven Svymbersky, the founder of Quimby's, opened the store in Chicago on 1328 N. Damen (at Evergreen) in Wicker Park, in a 1000 sq. ft. space. Since 1985 he had published over 50 zines with his friends, and had published Quimby Magazine for five years in Boston. 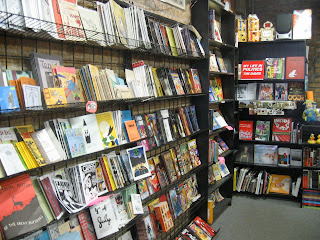 Steven explained the philosophy of the store with these words: "I really want to carry every cool - bizarre - strange - dope - queer - surreal - weird publication ever written and published and in time Quimby's will. Because I know you're out there and you just want something else, something other, something you never even knew could exist." (And yes, that was a V.) In 1997 Steven sold the store to Eric Kirsammer, the owner of Chicago Comics. Steven moved to Amsterdam with his family shortly thereafter. Eric purchased the store from Steven in order to continue Steven's commitment to the First Amendment. After a few years, the rent became too expensive to keep Quimby's at the same spot in which Steven had opened it. Eric moved it to it's current locale, 1854 W. North Avenue, to provide it with a more permanent locale. He also still owns Chicago Comics. Quimby's and Chicago Comics have a reciprocal "sister store" relationship, where we transfer materials between each other and often collaborate on ordering, outreach and off-site events.

We sell more weirdo stuff to read than I could possibly ever get to reading, and that is continually mind blowing.

A majority of the things we sell are independently published and sold on consignment. Since we operate on a different business model then regular stores we are able to take chances on selling some of the fun stuff we do: scrappy punk rock zines, stapled mini-comics, artist booklets with sewn covers, and much more. Consignment means that we pay the publishers a cut of their retail price after their items sell instead of beforehand, so we don't have to do the hard sell because we never lose any money on the items. Our consignment agreement is on our website here. 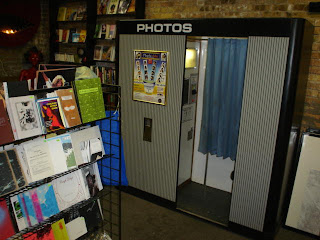 Info about our events are here:
http://www.quimbys.com/blog/store-events/


More info at our FAQs here. 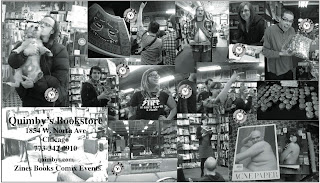