This is Todd Seabrook.

Todd grew up in Cleveland, Ohio, and received his MFA from University of Colorado at Boulder, and is currently a PhD candidate at Florida State University. His work has appeared in Tin House, Mid-American Review, PANK, CutBank, Quiddity, New Ohio Review, and 30 Under 30 Anthology. Mud Luscious Press published his chapbook This Semi-Perfect Universe in 2011. His second chapbook, The Genius of J. Robert Oppenheimer, won the 2012 Firewheel Editions Chapbook Contest, and his third chapbook, The Passion of Joan of Arc, won the Atlanta 421 Chapbook Contest. His most recent chapbook, The Imagination of Lewis Carroll, won the 2013 Rose Metal Press Chapbook Contest. 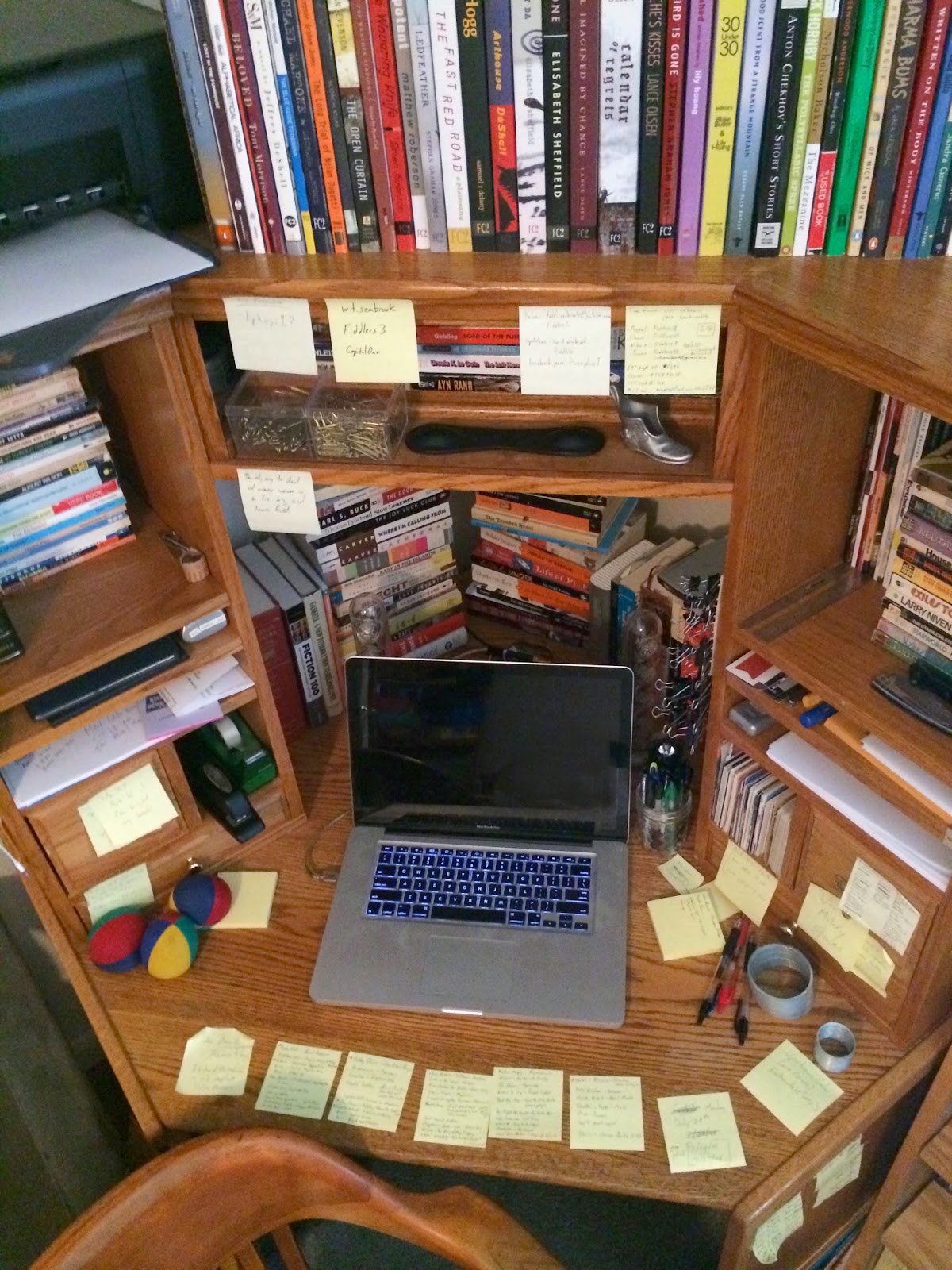 Welcome to my quaint corner of shame and infinite loathing. While there are ostensibly worse places in the universe to write—an Albanian prison mine perhaps, or, say, the surface of Venus—there are few places in the world as saturated in such unholy levels of dread and malaise than here. I’ve worked at this desk for eight years, and for eight years it has steeped in my bitter anguish of having chosen to be a writer. The desk itself, I think, is made of reclaimed timber from 16th century breaking wheels, and the hardware is mostly re-smelted Prussian swords. When I sit down to work, “Dies Irae” echoes through the alcoves, and blood seeps from the wood screws. That is not to say it hasn’t been a fine desk. I appreciate the height especially, the looming, judging nature of it, reminding me at every moment that I write in the shadow of every human who has come before me, and that I will inevitably and unconditionally fail to tell their story. It’s really less of a desk and more of a smoldering nest of self-revulsion and blind rage—which, as it happens, is a pretty accurate description of my writing style.

But there are a few perks to having a corner desk:

- It narrows my peripheral vision, allowing more focus.
- I write on a pentagram, not a rectangle.
- It feels like I’m playing an organ.
- Can never tell if there is a firing squad behind me.

The carefully honed aesthetic of my writing space combines all the accoutrements of a hobo-clown’s bindle with the feel of a Papa New Guinea penal colony. The Post-It notes lolling off the carrel like jaundiced tongues consist of either unattributed quotes—I’m going to get a tattoo of a sticker—or reminders of bets I’ve made with people that they have assuredly forgotten. The rest of the notes are lists of movies, books, authors, small animals, angel hierarchies, 17th century astronomical devices, and here and there a one-line story idea that is so abominable I can never lay eyes on it again. I keep no writing journals, no notebooks, no idea boards. These things have always felt tedious to me, a chore rather than a useful mechanism. If I want to remember something, I do. If I want to see it in list form, I write on a Post-It note and slap it to my desk.

Those harlequin balls are indeed used for juggling. I can juggle, by the way.

I write at night, alone, hidden from everything else, because that is the only way to see it all.
Posted by TNBBC Super Mod at 5:00 AM