2013 has been the-year-of-a-million-distractions for me so far. My few unannounced weeks away from the internet, my boss's disappearance (at my full time corporate job) and the endless overtime it necessitated, and my new side-gig as marketing director for CCLaP notwithstanding, I've been sucking so badly at reviewing the things I've been reading. And I really have no good excuse for it.

Accept then, if you will, this mini-review post of sorts, in which I gush and goo all over some of the small press short story collections that found their way into my hands these past 6 months.

If you have heard of these collections, and haven't read them yet, for shame. Rectify this immediately. If you haven't heard of them before, consider yourself officially informed, and get them in hand asap. You can thank me later.

Nick Antosca has a dark and twisted mind. One that I enjoyed crawling inside. He's got a strangle-hold on reality, force feeding its wide, gasping mouth with the stuff nightmares are made of.

In this collection of stories, we read about a teenage boy who, after he slips into a depression that no amount of therapy or drugs can touch, is faced with a radical treatment that is guaranteed to leave him happy but beastly. We watch helplessly as aliens seduce our most beautiful human specimens onto their ships, allowing some to return, of their own free will, back to their homes while others are found on the ground with their faces scooped out. And we see the employee of an animal testing lab as he's served up a gigantic heap of karma when he adopts a stray and starving dog and has a too-bad-so-sad belated change of heart.

I devoured this collection over the course of 24 hours, unwilling, no.. unable!, to put it down for long without finding myself reaching out for it again. I dare you to find a bad story in the bunch. Actually,I double-dog dare ya.

Where to start with this one?!  It contains stories by small press superstars Ryan W Bradley (who also designed the kickass cover), Roxane Gay, Lindsay Hunter, Ben Tanzer, and Steve Himmer... among others.

Every story is inspired by a metal song, and even if you're like me and never got the whole "metal" thing back when it was a thing, you'll totally fall for all the nostalgia those ridiculous songs stir up in this collection.

And it's got fucking LINER NOTES at the end of each story. LINER NOTES!! I know, right?! 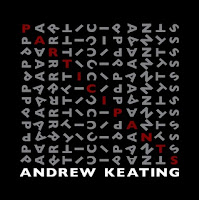 I stumbled across this collection and its author at AWP this March. I watched as he read from "Triple Berry Pie" and ad-libbed the word "hot" after every single sentence, encouraging the audience to repeat it with him. I enjoyed each and every story, thinking they couldn't get any better than the last, and being proven wrong each and every time. From the opening story about a guy who sells himself to science, obsessively signing up for participant studies to the man who awakens in a hospital, aware that something bad has happened and determined to put all the pieces back into place, Keating's ability to suck the reader in is bar none.

You know it's a good collection when you sigh at the end and wish it was 100 pages longer!

So I might be cheating here a little. This collection is most definitely a chapbook, clocking in at a very tiny 30 pages. But these stories read like little giants, deceivingly large of heart and head though incredibly light on words.

Justin massages the English language and makes the most of his simple and specific style. There's this lovely poetic-ness, a clear-blue-sky-and-green-green-grass sort of feel to his stories. They become places in which you want to curl up, places you wish you could call home. It's interesting to me - the words on the page are so confident and sure of themselves, a sweet contradiction to the author himself. And I mean that in the best of ways.

A very interesting book, this, and another potential cheat from me. Called a novel in flash fiction, I prefer to look at it as a collection of interconnected stories. Either way, it's written by a guy who knows the confusion of love and the power of hidden secrets coming to light.

I read this at the exact inappropriate time, without realizing it until I was a few stories in, but I was hopeless to stop. I was disgusted and pissed at the narrator, yet at the same time, I was intrigued. And the breaks between each segment urged me to read on even though I knew I shouldn't. Salesses writes as though he is speaking. His words hit the page fluidly, and run quietly down the edges and into your lap, and suddenly you realize you are carrying them with you.

You can really never go wrong with a Graywolf Press title. Their short story collections always impress me and this one was incredibly interesting - Steinberg plays around with story structure here AND retells the same story multiple times throughout the collection. A trickster, this one!

Though I totally got into it for the first few stories, I began to tire of the switching styles and different perspectives, and found myself rushing through the current story just to see if the next was any better. What began as promising and intriguing soon became distracting and disjointed for me. I wonder what impact spacing the stories out - pacing myself through the collection over a longer period of time - would have had on me? If you give this a go, that would be my recommendation to you. Space the stories out. Give yourself time to read other things in between. I bet their magic would work better that way.