Kelly Davio's Would You Rather


Kelly Davio
Would You Rather... 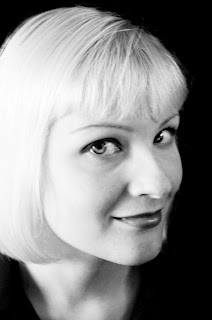 With my feet—no question. I have oddly dexterous feet, so I don’t think I’d be slowed down too much.

A long string of moderate sellers. I’d rather be someone with a career than someone with quick but short-lived fame.

I’d rather be well known now. The best thing about being a writer is touching other people’s lives with your work. It would be very unsatisfying to be dead when that finally happens!

Some people might argue that I already come dangerously close to opening every sentence with a conjunction! It’s a bad habit of mine. I think it wouldn’t be too tough for me to write “The Book of And, But, Yet, So, For.”

Tattooed. No question. I’d love peeking down at my arm and reading a great passage whenever the mood struck.

In the long run, I’d rather write what I believe in and let readers do with it what they will. It would be pretty delightful to be an overnight success, but the fun would be fleeting if I couldn’t stand behind the work.

A great deal depends on what we’re thinking of as “hate.” I’ve written—and thoroughly enjoyed writing—some characters who are loathsome and awful people. In that sense, I do hate them. I’d much rather have deeply unlikable characters than a plot twist that seems off.

I’d rather use my skin as paper. Blood makes me woozy.

I think it would be best for everyone involved if I became a character in my current project. I don’t think I want these characters running around in reality—some of them aren’t nice folks.

I’m a grammar nerd. I embrace punctuation, its rules, and its strictures. I think my stomach would turn were I to throw all the wonderful evolution of the English language over for my own stylistic oddity. I’d rather take the challenge of eliminating “e” from my work.

I’d rather be banned. As a teacher, I know that the moment a book comes into the high school curriculum, the evil empire of Sparknotes writes a dreadful summary and analysis, posts it on the internet, and kids regurgitate that summary in class. If my book were banned, kids might actually be tempted to read it.

I’d rather be hit on by Dylan Thomas. It would be interesting to see if he had any game. Also, while I’m a non-violent person, my antipathy for Ayn Rand is so great that I don’t know whether I could resist pulling her hair helmet.

I’d rather have to speak in haiku. It would make me think well before opening my mouth, which some people in my life might say would be an improvement on my current approach.

Would you rather be stuck on an island with only the 50 Shades Series or with a series written in a language you couldn't read?

Were I on a desert island, I think I'd have ample time to (attempt to) crack the code of a foreign language. A series in a language I don't speak would likely give me far more hours of useful brain-application than would Fifty Shades.

Would you rather critics rip your book apart publically or never talk about it at all?

As someone who’s only just beginning to be reviewed, I’m constantly frightened that the next review is going to be eviscerate my work. There’s an awful period of heart-pounding when I scan the review for pejoratives, followed by only slightly lesser heart-pounding as I re-read for veiled snarkiness. I might pass out if I read something that openly ripped my work to shreds. Even so, as a writer, I signed up for a life in which people get to form judgments of my work, so let them have at it; it’s better than no one ever hearing about my book at all.

I think it would be rather funny if a voice in my head narrated everything I did. It might also be informative:

“Kelly put on the old pair of jeans that made her look like beached whale.”
“Hey, I though I looked good in these…”
“A beached whale bloating in a hot summer sun, flies swarming in the foul stench of decay.”
“Okay. Not those jeans.”

I’d rather give up pen and paper. While I do still draft some things by hand, my writing is so sloppy that I have a hard time reading my own longhand.

Some parts of my current works in progress have been written while flat on my back! I have a tendency to throw out my neck, so I have become familiar with flatness. It’s not a bad way to write, actually.

I’d rather have no one show up. Then I could at least have a nice time chatting with bookstore staff (book sellers are my kind of people) and make some new friends that way. No one wants to be friends with the naked reader.

So, Twilight or anything by Jonathan Franzen? Can I skip both?

And here's Kelly's response to the question Sarah Habein asked her last week:

Would you rather have to give a reading about the worst thing you ever did (with your parents in attendance), or would you experience that worst moment all over again?

I'm a poet, first and foremost. We poets have a habit of airing the worst of our personal laundry in our writing, whether for good or for bad. I'd give the reading, even though I'd probably want to crawl in a hole afterward.

Would you rather have to use profanity on every page of your book,
or nowhere in your book?
Kelly Davio is Managing Editor of The Los Angeles Review, Associate Editor of Fifth Wednesday Journal, and a reviewer for Women’s Review of Books. Her work has appeared in Best New Poets, Verse Daily, and others. Her debut collection of poetry, Burn This House, was published by Red Hen Press in 2013. She holds an MFA in Poetry from Northwest Institute of Literary Arts, and she teaches English as a second language in the area.
Posted by TNBBC Super Mod at 5:00 AM