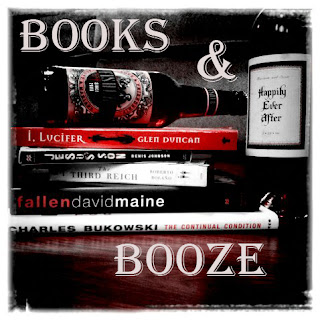 Scott Dominic Carpenter Drinks It Up

Let me start by breaking the rules. Yes, yes, I know: in “Books & Booze” we’re supposed to be the drinkmeister, crafting cocktails that incarnate each of our characters. But This Jealous Earth isn’t a novel. It’s a collection of 16 short stories, and if I lined up a shot for each member of my little community, well, let’s just say you’d be over the legal limit pretty darn fast. And some of you probably have to drive. For example, to the bookstore. To buy This Jealous Earth.

We’re talking hard liquor here. There’s no lingering over a glass of Pinot Grigio, no sipping of Mint Juleps. The first lesson about drinking comes in the opening story, “The Tender Knife,” where mild old Walter—a husband, a grandpa even—has to take a blade to his beloved pets. He won’t be able to face the ordeal without healthy doses of whiskey, high-octane stuff—single malt, peaty, strong enough to disinfect the cuts in his feet after he stomps over broken glass. (See how useful it is to have whiskey on hand? Just think of all the disease teetotalers bring upon themselves.) “The Tender Knife” is a gentle story that turns brutal, and by the end you’ll need a stiff drink yourself. So why not swing by the liquor store? You’re already going out anyway. Remember? On your way to the bookstore?

Overall, each story is its own drink. Take “Inheritance,” where Milo McCrae works with his sister to clear out their dead father’s home. This one is like sangria swilled on a hot day. It goes down so easily, and the effects sneak up on you. One minute you’re reminiscing in a pleasant haze, but the next, when you try to stand up, your face is making friends with the pavement. That’s how the past hits Milo when he lifts the lid on his childhood and the old ghosts spring to life. Do you need the ingredients for sangria? Red wine, triple sec, chunks of citrus and a medley of your favorite juices. So add the grocery store to your list of destinations.

Ever hear of scorpion shots? That’s right: at some bars you can order a dose of rum or tequila with one of these critters swimming around in the bottom of your glass. It adds an extra thrill. (Mr. James Bond recently popularized another version of this practice, with a scorpion perched on his knuckle as he drank, in Skyfall.) That’s what “Field Notes” is like, and not just because the kids in that story are fascinated by the venomous wildlife in the Arizona desert. No, the charge they get comes from brushing up against other kinds of danger—not just canyon cliffs and sibling torture, but also the rumbling tension between their parents, whose relationship is in danger of going nuclear.  I confess I’m not quite sure where to send you for all the accoutrements of scorpion shots. The pet store? Heck, give it a try.

OK, so I’m not going to do all sixteen stories. But I should mention the drams of aquavit—the six super-concentrated pieces (each just two or three pages long) scattered throughout the book.  They’re small. Unintimidating. But boy, do they pack a wallop.

In short, This Jealous Earth offers you a kind of literary bender unlike any other. You’ll hit all the highs and lows. Yes, there will be the giggles, but twenty pages later you’ll be filled with dread. And as with all over-indulgences, this one will hang over you for a while. So stop by at the pharmacy. Pick up some aspirin. Since you’re going out already.

Or if you’re too looped to drive, just order it at http://midwestgothic.com/2011/01/this-jealous-earth-by-scott-dominic-carpenter/.

Scott Dominic Carpenter was born in Minneapolis but grew up on the move. After proving himself ill-suited to mining, factory work, and other forms of hard labor, he took refuge in libraries and classrooms, many of them in Madison, Wisconsin. He teaches French literature and critical theory at Carleton College (MN), but in addition to his scholarly work, he commits fiction, examples of which have appeared in venues like Chamber Four, Ducts, Midwestern Gothic, The MacGuffin, Prime Number and Spilling Ink. A Pushcart Prize nominee and a semi-finalist for the MVP Competition from New Rivers Press, he will soon release a debut novel (Theory of Remainders, Winter Goose Publishing).
Posted by TNBBC Super Mod at 5:00 AM