This is Alex Kudera.

Alex's award-winning debut novel, Fight for Your Long Day (Atticus Books), was drafted in a walk-in closet during a summer in Seoul, South Korea. In 2015, look for Auggie's Revenge from Beating Windward Press as well as the e-singles "Frade Killed Ellen" (Dutch Kills Press) and "Turquoise Truck" (Mendicant Bookworks). A lifelong Philadelphian until fall 2007, Alex currently teaches literature and writing at Clemson University in South Carolina. 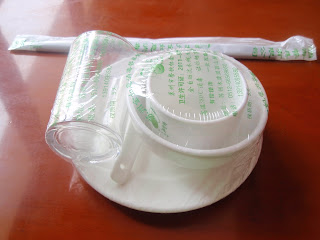 The short answer is wherever I can. I’ve never owned a home with a den, study, or even a writer’s nook; in fact, I’ve never owned a home, and until recently, the apartments I’ve lived in have been cluttered and small. I can’t remember a single writing desk I’ve ever set up and used regularly.
My writing life is portable, and I rarely draft on a word processor; I write with ball point pens and spiral notebooks—wide or college-ruled, but I prefer the latter. At back-to-school sales, you can purchase cheap 70-page notebooks for 20 cents at big-box chains, and I almost always keep my eyes open and pick up a few of these. When I go upscale, and purchase a nice bound volume full of blank pages, I never use that notebook or diary. This summer, in fact, I bought such a diary for my daughter, one with a Frozen theme, and it has disappeared after only a couple written entries. It’s been decades since I’ve purchased a nice pen or notebook for myself.

I’ve been teaching college classes since fall of 1996, started young, but I’ve never had a private office, so I write infrequently in these shared spaces. Sometimes, if I’m alone I can type in scenes from my notebook manuscripts although office computers almost invariably have internet access which hinders my productivity. I can get work done at library or other campus computers in public spaces as long as I don’t know anyone nearby. Crowds are not ideal, though, so I love sitting in college libraries on Friday evenings or Saturdays, game days, when students choose the life of the party over the life of the mind.

My family situation is irregular as my wife has a job in a different state although I’m with her and our daughter often, even during semesters. So as much as I’m able, I print out copies of drafts and bring my notebooks on airplanes, and then write by hand or edit printed sheets in the air or in waiting areas when I’m not grading papers or reading in advance what I’ve assigned. Because I’m alone where I teach in South Carolina, it’s easier to get work done—grading, lesson plans, and creative writing. I haven’t had television reception often as an adult, so that helps, and this past spring I cut the internet cord (or lost the signal?), although it seemed to aide my reading more than my writing.

As a family, we’ve spent chunks of three of the past four summers in my wife’s native China, and I’m not expected to participate in every Chinese-language-only activity; sometimes I get a room of my own or even an entire apartment for hours or days at a time. I almost never step foot in McDonald’s when I’m in the states, but for whatever reason, a few summers back, a McDonald’s in Suzhou, near my daughter’s kindergarten, became a significant writing place for me. I’d get her to school at 8 a.m., and then scoot over to Ronald for a McCafé and clean well-lighted place. My author photo is from this past summer, not 2012 when I wrote inside each morning. I never write with underwear on my head unless I’m also protecting my neck and ears from the sun.

The novel I was working on in that McDonald’s remains my unpublished baby, an on-again, off-again project that I first began in 1991, but for published work, Fight for Your Long Day was drafted in the back basement Starbucks of the COEX underground shopping mall in Seoul, South Korea. The place was packed with Korean teenagers, but I couldn’t understand anything, so I was able to write there.

In Xi’an, China, where my wife’s relatives live, a basement restaurant that served a whole pot of hot green tea with lunch became one of my favorite spots in 2013. I wrote the first draft of “Frade Killed Ellen,” my newly released e-single, as a 40-page story in that restaurant, and I’d also visit a Dunkin’ Donuts on the ground level of the same mall (this past summer, I noticed Dunkin’ had disappeared). I revised and typed “Frade Killed Ellen” back in my wife’s sister’s spare room. Her apartment is in a neighborhood of Xi’an where I’ve never seen another American or white person in my ten weeks of living there.

This past July in Xi’an, I completed final edits for Auggie’s Revenge, my second novel due later in 2015. These travels might sound exciting, and they can be, so I’m grateful, but they also add to stress, expenses, and paperwork. I’m just as happy, maybe more so, living my quiet life in the states.
Back in South Carolina, my Schocken Kafkas and my father’s Penguin Kunderas pose on an old living room chair I sit in when I’m writing or reading at home. Although I’m sure I’m jinxing the place by saying this, I live on a quiet block considering I have so many undergrads and other young people as neighbors. A card table I take meals on is another spot where I use my laptop, and once in a while I type or edit off paper in bed.

It’s a bad habit, but if I get an idea in the car, and I’m enthusiastic about it, I try to write it down. Don’t do this—it’s dangerous! But if the idea seems strong enough, I can’t resist saving it. I’m usually driving at moderate to slow speeds in the right lane anyway.

But my ideas are all over the place, and recently I’ve gone back through notebooks and found sections or paragraphs or sentences that were jotted down and never used for current or published fiction. Sometimes it’s because I couldn’t find a place to fit them in, but occasionally it’s because I never found or remembered to look for them again. 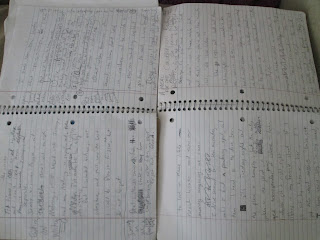 Alas, in the past, I’ve kept separate notebooks—one for lesson plans, one for journal entries, and one for stories and novels. But more recently, I don’t do this, so I wind up with a list of “must dos” for teaching on one page, an idea for a story next, and then an entire rough draft of a story or novel scene followed by a journal entry which begins with a lesson plan and then a list of bills to pay.

But after Lori invited me to write this piece, I avoided my notebooks and went straight to my laptop and composed these words to make sure I kept my word. Thanks for reading.