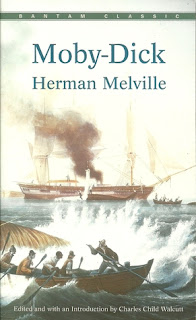 I will never forget the first and the second times I read Moby-Dick. The first reading came in the spring of 2003, the first season after I finished college and a few months before I entered graduate school, that period in my life where I dangled between worlds and histories— I was then working as a “dietary aide” at a retirement home, washing dishes, serving food, stocking shelves, etc., and waiting for the end of the summer when I would be married and on my way to Boston from Wisconsin, the only state I had ever known.

I was startled by Moby-Dick the way many new readers are startled. Melville’s book is unlike any other novel of “classic” literature; in fact, I would argue Moby-Dick is unlike any other novel, save maybe the assembled works of Melville. No other book combines such modernity and formal strangeness and exuberance of language with a story and characters and philosophical seriousness so ancient. I read it in a state of youthful ecstasy. And then the novel concluded and the fever subsided and I moved to other books and authors, since a writer’s earlier twenties are the best time to be a writer because you are old enough to have some sense of what you are interested in, but every style, every voice, every form and trick and technique is still more or less virgin, unexplored.

(I should mention that in the years to follow whenever the topic came up I babbled enthusiastically about Moby-Dick, and I often pulled my copy from the shelf and read and reread the opening pages in a breathless exultant state. And whenever we crossed paths with Melville’s ghost on trips throughout Massachusetts, I was lost again in the old awe. I gave copies away as gifts; I thought restlessly about the ocean; we went on a whale watch. Moby-Dick was always there, even when it was not.)

I next read Moby-Dick two years after I finished my MFA program. Here I found, again, all the greatness of my earlier reading, but a greatness enlarged and illuminated by my maturity and experience. And I began to understand that Moby-Dick is both a very modern book, because Melville perceived truths well beyond those of his time, and an ancient book, far older than its publication date. Melville was of his time and also beyond it and before it. His slightly older contemporary, Hawthorne, influenced him, yes, and Hawthorne’s stories helped free Melville from the constraints of experience and fact and allowed him to enter the realm of imagination. But Melville was insatiable in his ambition and curiosity, and he took into himself many of the greatest (and strangest) writers of literary history: Robert Burton, Sir Thomas Browne, Rabelais, Byron, Milton, Coleridge, and, most famously, Shakespeare and the King James Bible. Melville always was a writer outside of his time, and this was one of his many strengths.

I’ve since read Moby-Dick another six times. I read it every year, along with Melville’s final novel, The Confidence-Man (if Moby-Dick is my favorite novel then The Confidence-Man is my 1B), and Billy Budd. I’ve read every book he published, whether story collection, novel, or poems, at least once and often at least twice. I’ve read the books he took as influences, and many such as the King James Bible and the works of Browne and Rabelais and Byron and Burton have become admired favorites. Melville as a source and inspiration is inexhaustible.

I wanted here to explain, as best I could, what Melville means to me. To say Moby-Dick is my favorite novel or Melville is my favorite writer simply does not measure to the truth. Melville’s fame during his lifetime was brief. The period of his obscurity and shame was far longer, and after he died a note was found pasted to his desk that read, “Stay true to the dreams of thy youth.” In the years after my MFA experience concluded, at a time when much of my ambition and joy and enthusiasm for writing had gone dormant, when I read books without interest, when I wrote, but no longer enjoyed writing for the act of writing was cluttered by insecurities and dread, boredom and self-loathing, then Melville’s example—his rise to greatness and his life long pursuit of greatness, even after publishers and the public refused him—as much as his literature, gave me strength and inspiration and, to some measure, hope for my own literary fate. I couldn’t begin to conclude where I would be without his example.

Robert Kloss is the author of the novels The Alligators of Abraham and The Revelator. He lives in Colorado.
Posted by TNBBC Super Mod at 5:00 AM