I should start a "Note Worthy" review series, specifically for the books I've taken notes on as I read. I feel like this is becoming a recent trend. First, for The Country of Ice Cream Star, to keep track of the amazingly beautiful, but initially complicated, invented dialect. And now for This Boring Apocalypse, which is just one of the most bizarrely written lit-fic novels I've read in a long time. 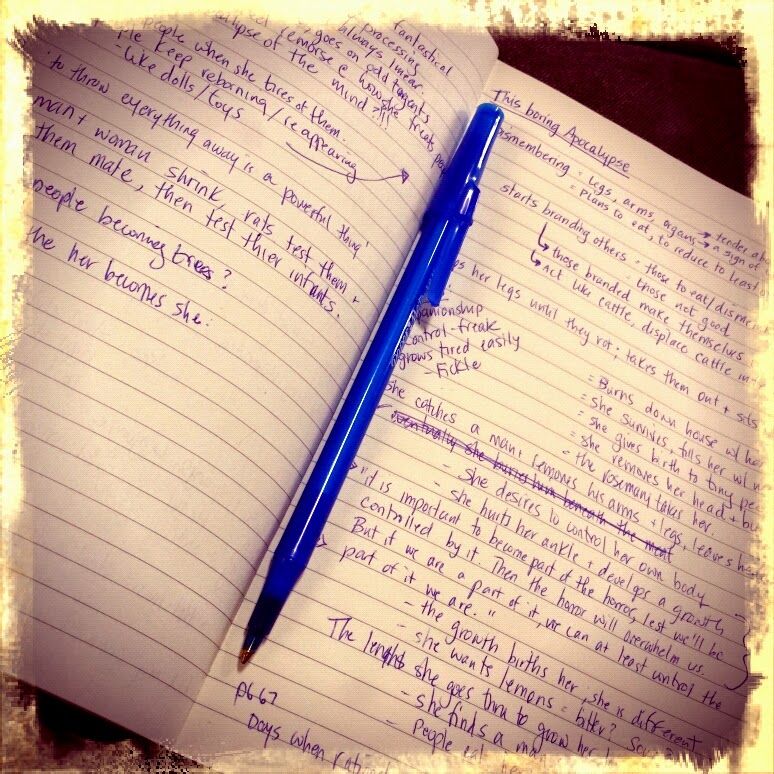 Here we have a woman who attempts to eat, and then begins to dismember, her girlfriend. Like, literally removes her body parts, starting with her legs, which she carries around with her and stores in her closet. What initially appeared to be a tender sexual act suddenly becomes tainted by her fear that her girlfriend is cheating on her, and so next she removes her arms. To keep her captive. And then she wants to reduce her to her smallest functioning parts, so she begins to remove the organs and then her head. So all she is now is just a hollowed out torso. Fucking weird, right? It's almost like she's playing with a doll, or a toy. There's no blood. There's no fighting. There's just this pop and bam! Body parts removed.

And like a kid who grows bored with their toys, our narrator tires of the girlfriend, disposes of her and chases down a man to play with. She wastes no time in removing his arms and legs. Pop. Pop. Off they go.

Then she sulks because she feels her own body is in control of itself and she desires to be in control of IT. While trying to control her body, she injures herself. This injury, which festers rapidly and painfully, ends up re-birthing her girlfriend. What the fuck, right?

As she's nursing her festering wound, she says "it is important to become part of the horror, lest we'll be controlled by it. Then the horror will overwhelm us. But if we are a part of it, we can at least control the part of it we are." And that's basically what the rest of the book amounts to, her need for control, at all costs. Of herself and of others. Whether this stems from a desire for companionship, or a place of intense jealousy, we ultimately find ourselves sucked down into her diseased brain. A mental rabbit hole we cannot claw our way back out of. It's a complete horrorshow.

People are planted in the ground by their feet and become trees, lab rats don white lab coats and perform experiments on infants, people she tires of and lets go return to her in the strangest ways... it's like an apocalypse of her mind.

Told in short, fantastical chapters, This Boring Apocalypse is a fast paced, increasingly bizarre novel filled with the surreal and distorted imagery that is the stuff nightmares are made of.
Posted by TNBBC Super Mod at 5:00 AM