Book Giveaway: There Is No End To This Slope

It's the first of the month and you know what that means.
It's time to bring you June's Author/Reader Discussion book!

We will be reading and discussing There is No End to This Slope
with author Richard Fulco. 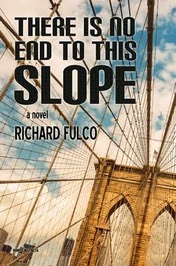 Richard and his publisher Wampus Multimedia are giving us 10 copies to give away:
A mix of print (for US residents) and digital formats (open internationally)!

Here is the goodreads description to whet your appetite:

He writes letters to a dead girl—John Lenza, an aspiring writer from Brooklyn, New York, hasn’t written a novel, a play, or any other potentially publishable project. His obsession with his part in the death of his best friend Stephanie in high school, is a metaphorical brick wall—blocking him from a fulfilling life. Lenza’s struggles to reconcile his guilt from the past and to enjoy the present sets the tone for Brooklyn native and playwright Richard Fulco’s emotionally charged debut THERE IS NO END TO THIS SLOPE.

1st century Willy Loman, Lenza drifts, letting things happen to him rather than figuring out what he really wants from his work-life and his relationships. At Cobble Hill High School he meets his future wife Emma Rue, an impulsive alcoholic. At a “writerly” coffee shop near his new digs in Park Slope he meets Teeny, an overweight gay man, who mines Lenza’s life for his own material. Richard, a homeless man becomes a voice of reason and a roommate, while Pete the landlord worries mostly about whether Lenza is truly taking special care of those beautiful wood floors in the apartment and, when Lenza loses his job, if the rent will be paid.

At one point in THERE IS NO END TO THIS SLOPE John Lenza describes himself as intelligent, perhaps too intelligent to do anything. For him and many of the characters in Fulco’s novel it is hard to find a way to navigate the day-to-day while nurturing a sensitive and creative spirit. Does John Lenza deserve to be tortured by something that happened so many years ago? Or is the event really a safety net that he allows to prevent him from finding out what his true creative potential might be?

Through deeply wrought characters and scenes that mirror the angst everyone faces as life happens and years pass, Fulco touches on a fundamental issue that drives great artists to self-destruct. Ironically when Lenza has wrung all he can out of his pained self, it may be the mundane day-to-day that ultimately saves him.

This giveaway will run through May 8th.
Winners will be announced here and via email on May 9th.

1 - Leave a comment here or in the giveaway thread over at TNBBC on goodreads, stating why you'd like to receive a copy of the book, what format you prefer, and where you reside (remember, only US residents can win a paper copy!).