Happy Father's Day to all you daddy's out there.

In honor of Father's Day, I thought I'd share some of the father-focused books I've read in recent years. Each one of these novels deals with fatherhood in one way, shape, or form. Good dad's, confused dad's, or absent dad's... no matter what kind of dad, we celebrate you in literary fashion!

When you're 4 years old and your dad owns his own publishing company, you can pretty much bet that the cute and crazy things you say will eventually be recorded and released for the entire world to pine over.

An adorable collection of silly and stunningly insightful sayings from 4 year old Lincoln - and yes, he has quite a lot to say about his daddy.

In this zombie novel that is not a zombie novel, friends Matt and Mike wander the streets in search of Matt's father, who they believe has been turned into one of the undead and who may, at any moment, come shuffling back to one of his many old haunts.

The love and concern that Matt has for his father, the fear he harbors of leaving him out in the world, undead and wandering alone, is the rock around which this novel revolves. 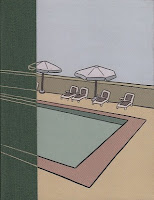 This collection of non-fiction essays focuses on what it's like to be Jewish, to be a father, and to be a Jewish father in the 21st century.

Kevin shares the memories of his son's circumcision, and during elementary school, his obsession with wearing dresses. And the story of his daughter's near drowning in the pool, among others.

The story of a reluctant father told in flash fictions bits, I'm Not Saying picks apart one man's reaction to the news that he is the father of a 5 year old boy, upon the death of the boy's mother.

It's lovely and heartbreaking and tender and wicked all at the same time.

Fight Song is about a father who is failing at life - sucky programmers job where is under appreciated, a near loveless marriage, and kids who'd rather text and play video games than hang out with him.

Rather than suffering through a depressing story about a man who is this close to losing it all, we instead find ourselves on a journey of self-discovery, of finding friends in the unlikeliest of places, of learning the value of accepting help even when you weren't asking for it.

Another father-in-crisis story that you worry will tug horribly at your heart strings but instead finds you strapping your ass to the car seat for fear of falling off!

TRFoC is an incredible demonstration of human resilience. A father who blames himself for the death of his children hits rock bottom and decides to claw himself back out by taking on a job that puts him in charge of the care and counseling of a crippled teenage boy. The two hit the road on a journey of sorts - one that helps and heals them both.

A son's tender, honest look back at the life and death of his abusive father and the impact it has had on his life - Another knock out from Michael Kimball.

Big Ray is a microscopic look at how the things we do and say scar a person's soul, leaving permanent reminders of us, for better or worse, long after we are gone. But it's not entirely morose. Michael's thrown in some dark humor and "yo daddy's so fat" jokes to lighten the mood a bit, and because, well, it's human nature to find the funny in the face of death.

As I read My Father's House, I saw it as Ben's way of publicly expressing what it is like to lose a parent to the front row horror show that is Cancer. It felt like a cleaning of the slate and of properly saying goodbye. And I felt it was a true reflection of the chaotic feelings that rush through you from moment to moment, day to day, when preparing yourself for the ultimate and unavoidable loss of someone you can't imagine living without.

Fathermucker is a mosaic of fatherhood. It's clearly filled to the brim with pieces of Greg's own experiences and it tenderly balances the good with the bad, the funny with the serious, the parental frustrations with the silliness of childhood.