This is Scott Elliot. His new novel is TEMPLE GROVE (The University of Washington Press.) Scott’s first novel Coiled in the Heart (BlueHen/Putnam, 2003) was a Booksense 76 Selection, a Literary Guild alternate selection, and a finalist in two award categories for The Texas Institute of Letters. The novel was featured on NPR’s Morning Edition with Bob Edwards and was chosen for the 2005 American Library of Congress sponsored One-Community-One-Campus-One-Book celebration in Bowling Green, Kentucky. Scott’s essays and short stories have been published in several literary and other journals including the Antioch Review, The New York Times, the Louisville Review, Juked, Mayday, Forklift Ohio, Hawk and Handsaw, the Writer’s Chronicle, and elsewhere. His collection of short stories Return Arrangements was a 2009 finalist for the Flannery O’Connor Award for short fiction. In 2011 he was awarded the G. Thomas Edwards Award for Excellence in Teaching and Scholarship at Whitman College, where he is Associate Professor of Creative Writing and English. In 2012 he founded the Walla Walla Whitman Imaginative Writing Partnership, which places talented Whitman undergraduate writers in public schools. He lives in Walla Walla, Washington with his family. His website is www.scottelliott.net

Spaces Away from the Desk

There’s the place where a writer does the actual physical writing, puts the ass in the chair, gets black on white.  And then there are the places where the writer does the imaginative work. These places are everywhere, unconfined even to waking hours.

The poet Donald Hall has mentioned the idea of hosting an idea for a long time before writing it down. The writer and teacher of writing Donald Murray spoke of assigning tasks to his subconscious that it would perform while he was going about his day, or seeming to.  One of the best writing jobs I’ve ever had was when I worked in the Shipping and Receiving Department of Case Logic in Boulder, Colorado. I would fill orders and often simply stroll the aisles cleaning up packing material while also working on my first novel. This hosting, this work of the subconscious, happens everywhere, even (for some writers especially!) in dreams, and sometimes without the writer’s volition.

For a variety of reasons due to the complete onslaught of two boys (now 5 and 2), priorities elsewhere, my writing space has not been the retreat it once was or that I would like it one day to be. It is not a bastion from the chaos of the world whose controlled environment might help me control the worlds I want to create. The space doubles as our guest room and, unless the boys are asleep, it’s prone to frequent and often wonderful visits. While I foresee a future in which I won’t trip over fire trucks and squeaky toys  as I fumble toward the writing desk to see if I can work in some time at the QWERTY keyboard before the boys wake up,  more often I have to take my writing where and how I find it. The poet Sara Vap who visited Whitman College (where I teach) said that after her children were born she went so far as to write poems in her car while she was stopped at traffic lights. I haven’t tried this—perhaps this is more an option for a poet than a novelist?-- but this extreme and efficient (!) technique of tucking in any time you can after the advent of kids resonated with me. 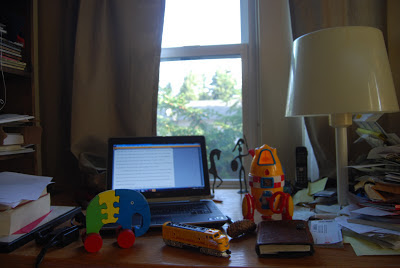 There are some ways in which one can better court the activity of mind conducive to good writing, jumpstart the process and get it moving when one is away from the space where the actual writing happens.  A good walk works for me if there’s not much time, doing  yard work or gardening is also good thinking-prior- to-actual-writing activity.  I once heard T.C. Boyle say at a reading that while at work on one of his books he got into the habit of digging a hole and filling it back in. For me, solo hiking and fly-fishing work like nothing else to get me into the proper head space for working on writing obstacles and generating good  energy and ideas to bring back to the page. Where I live in Walla Walla, Washington, I’m lucky to have a few relatively quick hiking spaces that help me get into the zone where the best writing away from the desk may happen. One of these is the South Fork Walla Wall River Trail, a view from which is here. 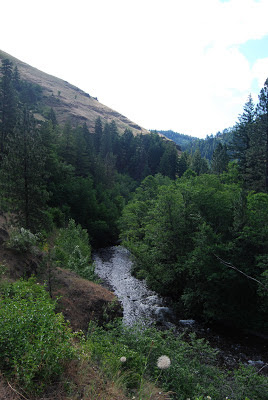 Another place I sometimes go for away-from-the-desk writing is McKay Grade,  a rough gravel road used infrequently by hunters on quads, that goes up into the Blue Mountains, our little spur of the Rockies . I sometimes joke that McKay grade is my Stairmaster. It’s also sometimes my writing desk away from my writing desk. It’s about a ten to fifteen minute drive from my house. Herds of elk sometimes grace and  graze in the wheat fields nearby, there’s  bear scat under the apple trees in the fall, and a few years ago a cougar kit was abandoned in a barn on one of the farms I pass on the way in. Here’s the view from McKay Grade: 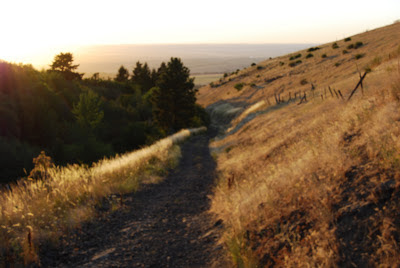 I also sometimes take walks at Bennington Lake, a reservoir about five minutes away, surrounded by rolling wheat fields and with views of the Blue Mountains. 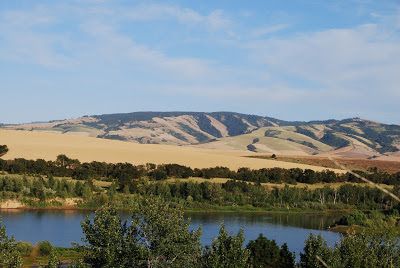 Within an hour to two hours of Walla Walla are some good fishing streams. . I can only count fishing as writing work if I go alone. If someone else is there, I become too self-conscious to enter the writing zone. The activity of fly casting, the quiet sweep of the line, occupies the surface of my mind, while I work on problems in the writing. The motion of the river suggests narrative motion. There are, of course, also parallels between fly-fishing and writing—casting into the mystery of words.  David James Duncan has referred to a fly as a little floating fiction, tied with nimble fingers to resemble a real fly, a bit of entomological mimesis. When I can (see passage on kids above), in the fall, I go fishing for steelhead (ocean-going rainbow trout up to fifteen pounds) on the Grande Ronde River.  Sometimes, of course, the quiet thinking is interrupted  by beautiful action, which I will submit is analogous in some ways to the writing process—patient, speculative, quiet work resulting in a discovery, a take, something worthwhile on (or within) the line(s) that pulls at you with surprising urgent force. Holding a fish that has traveled hundreds of miles upriver from the sea is something like holding a published book in which you’ve invested hundreds of days’ work. Here’s a photo of Grand Ronde steelhead that rudely interrupted my away- from -desk writing one day two falls ago: 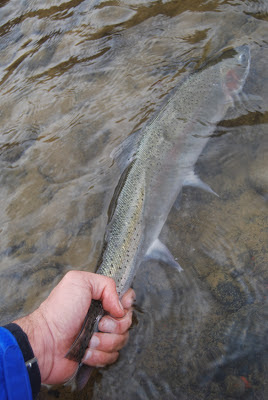 These outings might be said to be part of a healthy writing ecosystem; I could and do get work done without them, but it doesn’t feel as good and right. For each novel I’ve written, I would guess there were probably a dozen or so breakthrough moments attributable to outings like these on which I courted energy to serve me in my writing. Probably as many or more eureka moments can be credited dreams, but that’s a different space for another time. Many a time I’ve returned from one of these walks or a fishing trip with my heart rate up, my senses awakened, a renewed wonderment at the teeming gifts of the natural world, and, as if in response to these superabounding gifts, the glow of a new idea, a fresh approach, something I need to get down alive in me.  In these moments I know that whenever or wherever I do next sit down to write, whether in an airplane seat, the porous borders of my toy-strewn study/guestroom, or during a quiet early morning or late night moment I’ve stolen from a busy day, this energy will pull me down the hill of the project because I’ve already done the uphill pushing away from the desk.

Check back next week to see Adam Goloski's writing space...
Posted by TNBBC Super Mod at 5:00 AM