Andrew F. Sullivan Takes it to the Toilet 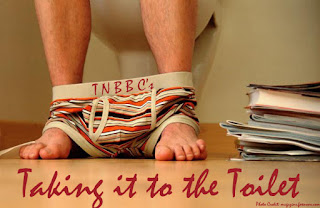 Today, author Andrew F. Sullivan takes it to the toilet. Andrew's from Oshawa, Ontario. His fiction has been published by Joyland, Necessary Fiction, EVENT and Little Fiction, among other places. His debut short story collection All We Want is Everything is forthcoming from Arbeiter Ring Publishing in June 2013. He no longer works in a warehouse. Find Sullivan at www.andrewfsullivan.com 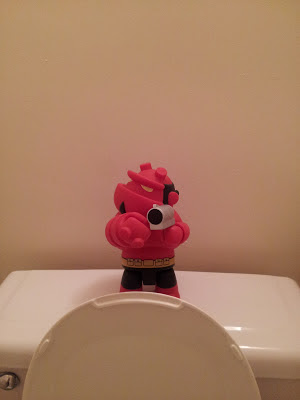 As a child, I thought it was a joke when someone said they were reading on the toilet. Every bowel movement was fast, sudden, healthy even—I thank my parents for this experience growing up free from constipated hours trapped inside the house, the bathroom walls becoming a tomb to snare me inside a cloud of my own waste. I was lucky to escape those horrors.

Intestinal distress waited far over the horizon, beyond my reach or understanding until I met alcohol many years later. Alcohol will teach you many things—its greatest tool takes the form of consequences. I have learned a lot about consequences since then, mainly the consequences of rye and gin crossing paths in the middle of the night. As time has passed, those easy bowel movements of old have become harder to remember or understand—each one has been flushed away as they all end up in the same place as gold fish, forgotten babies and crocodiles. They belong to a different era, one I can’t really keep track of anymore. Back then, I thought you lit a match to see if your gas would come alive as fire. I still kind of wish that part was true.

I still cannot get much reading done in the bathroom, but it has crept into my life, slowly slipping in around the edges as I get older. I don’t leave many books in there—I still worry about the ghosts of mold and mildew waiting to find a foothold in my apartment. The building is old and the spores are always waiting, patiently biding their time until some sopping wet paperback lets down its guard. I do not trust my aim in the middle of the night and I don’t want to leave library books reeking of ammonia. I bring the book with me and leave nothing behind.

So what do I bring with me? Graphic novels and comic books—for a while it was Hellboy I held in my hands while dealing with all the abject I had to offer. Maybe it was due to his violent adventures in the supernatural muck of our distended world. Maybe it was due to some long implied belief that you’re shitting out a demon, all the terrible things inside you—I was raised Catholic after all. But in the end, I think it’s the stories you can follow without straining under the single light bulb, the ability for a graphic novel to let a narrative to take shape without all the heavy lifting done by words. Mike Mignola and all his artists create a world in Hellboy defined by its shadows, by what is lurking just beyond the edge of the light. Hellboy is a monster fighting monsters, but the real details lie in the design of the panels, the spaces where his battered humanity might shine through with the flick of a wrist or a lighter. That’s a lot easier to look for those moments when you are trapped inside the bathroom with your mistakes from the night before, wrestling with your own intestinal demons. Sometimes I wonder if Hellboy ever had to wipe with that big, stone hand. I hope it never came to that in the end.

Once I have it in my hands, I may end up reading my own book in the bathroom over and over again. After all, just like any child, we will always be fascinated with our own shit.
Posted by TNBBC Super Mod at 5:00 AM