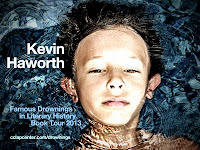 This Where Writers Write is part of CCLaP's Famous Drownings in Literary History blog tour. Check it out:

This is Kevin Haworth.

Kevin's first novel, The Discontinuity of Small Things, was awarded the Samuel Goldberg Prize for best Jewish fiction by a writer under 40. It was also recognized as runner-up for the 2006 Dayton Literary Peace Prize. His collection of non-fiction essays, Famous Drownings in Literary History, was released by CCLaP in 2012, and won Kevin a pre-publication grant from the Ohio Arts Council. A two-time resident of the Vermont Studio Center, he is also a winner of the David Dornstein Prize for Young Jewish Writers and the Permafrost Fiction Prize. His fiction and nonfiction appear in Sentence, ACM, Poetica, Permafrost, and others. He lives in Athens, Ohio with his wife, Rabbi Danielle Leshaw, and their two children, Zev and Ruthie. He teaches writing and literature at Ohio University. 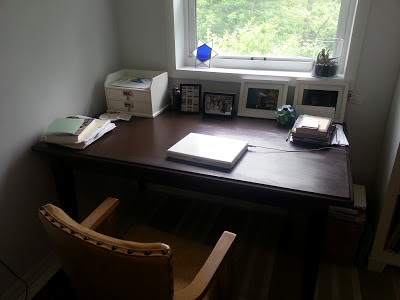 We live in a tiny house.  It used to be even smaller—to get to the space where my desk is now, you had to walk out the kitchen door, go through the backyard and past a wall where a big snake lived, and enter the bottom half of the house through a separate entrance.  When we moved in, eleven years ago, the already-small house was divided into a top half, where we lived, and an “in-law” apartment with its own kitchen and bedroom.  Eventually, with two children, we outgrew the luxury of this dedicated guest space, broke through the floor, and installed a spiral staircase that connects the upper half of the house to the lower one.  My office is in that lower half, in a former bedroom that now shares space with the spiral staircase, a walk-in closet, and the door to our current bedroom.  Because of the stairs, some of the noise from upstairs always drifts down, but there’s plenty of desk space and room for books all around.

We are a creative family.  My wife is an award-winning writer.  My son plays the cello and several other instruments.  My seven-year old daughter seems to require two distinct art spaces—a desk for drawing and journaling, and a section of the front porch for painting and displaying her work.  All of our creative spaces bleed into our family spaces.  That can lead to conflict (Now is not the time for cello! my daughter will yell, when she wants to watch television right next to where her brother is playing), but it reflects the priorities of our household.

I’m the fortunate one—my little studio, next to the staircase, backed by a closet—is as private as it gets around here.
Posted by TNBBC Super Mod at 8:00 AM