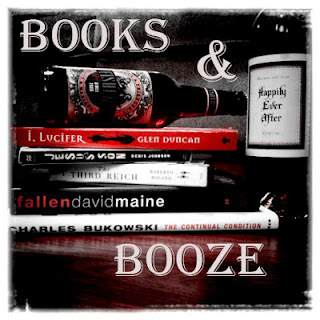 Tonight, author Kelly Davio gets down in it:

I believe that you can tell a lot about a person from looking at books she reads and the cocktails she drinks. In my case, when it comes to both poems and libations, I have a passion for the classics—though I appreciate a modern twist—and I like my wit and my beverages dry.

I won't incriminate myself too far in saying how large a role the following two drinks had in my poetry collection, Burn This House, coming to its final, published form (I kid. Hemmingway famously said that one should write drunk and edit sober, though I preferred to do both sober and celebrate and with a cocktail later). Yet when I think about the best flavor analogues for the mood of this book, there are two cocktails that taste, to me, just like poetry.

The first is an homage to the collection’s unofficial mascot. He makes a number of appearances throughout my collection, from his cameo appearance in smacking my window to his cohort’s swarming the streets of England. He even takes a prominent spot as the variegated beauty on the book's cover. It seems only appropriate that my own twist on the Aviation Cocktail should give a nod to the lowly pigeon.

Shake the first three ingredients over ice, and serve straight up in a martini glass.

The title poem of Burn This House was among the first of the pieces in the book to be published, and as such, it became a controlling tone for the collection as a whole. That favorite poem seems like a perfect partner for my favorite warm-weather cocktail, my ginger-heavy variation on the Moscow Mule.

The Mule that Burned Your House Down

Pour the vodka over ice and the raw ginger in a copper mug (no, a glass won't do), then top off with ginger beer and fresh lime juice.

Plan to make yourself a few of these—you have a lot of poems to get through in Burn This House. Just don’t stand up too quickly afterward.

Kelly Davio is Managing Editor of The Los Angeles Review, Associate Editor of Fifth Wednesday Journal, and a reviewer for Women’s Review of Books. Her work has appeared in Best New Poets, Verse Daily, and others.

Her debut collection of poetry, BurnThis House, was published by Red Hen Press in 2013. She holds an MFA in Poetry from Northwest Institute of Literary Arts, and she teaches English as a second language in the Seattle area.
Posted by TNBBC Super Mod at 10:49 PM