This is Kathleen Rooney.

She is a founding editor of Rose Metal Press, a nonprofit publisher of literary work in hybrid genres, and a founding member of Poems While You Wait, a three-person team of poets and their typewriters who compose commissioned poetry on demand. She is wearing a mustache in her author photo to celebrate the release of her sixth and latest book, Robinson Alone, a novel in poems based on the life and work of the poet Weldon Kees. She lives in Chicago with her husband, the writer Martin Seay. 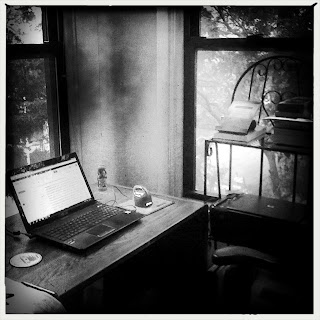 Earlier this spring, I read Edna Ferber’s novel So Big, which won the Pulitzer Prize in 1925. In it, Ferber has the unhappy and unlikeable title character Dirk “So Big” DeJong, during his soon-to-be-abandoned studies to become an architect, express his distaste for the type of structure in which I have my writing space:

His contempt for local architecture was now complete. Especially did he hold forth on the subject of the apartment-houses that were mushrooming on every street in from Hyde Park on the south to on the north. was always very elegant in speaking of these; never called them ‘flats’; always apartments. In front of each of these (there were usually six to a building), was stuck a little glass-enclosed cubicle known as a sun parlour. In these (sometimes you heard them spoken of, grandly, as solariums) dwellers took refuge from the leaden skies, the heavy lake atmosphere, the gray mist and fog and smoke that so frequently swathed the city in gloom. They were done in yellow or rose cretonnes. Silk lampshades glowed therein, and flower-laden boxes. In these frank little boxes, read its paper, sewed, played bridge, even ate its breakfast. It never pulled down the shades. 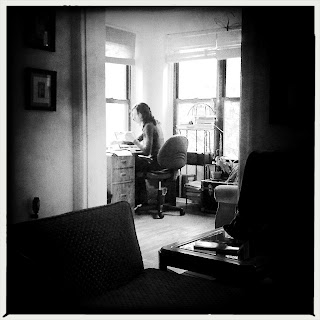 Unlike Dirk—whose opinion Ferber clearly intends for the reader to disagree with—I love my solarium on the third and top floor, even when it’s not sunny. Rainarium, windarium, cloudarium, snowarium—this room is my favorite place to write. 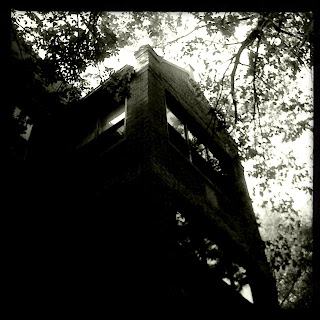 Check back next week to see where Colin Dickey gets his writing on.
Posted by TNBBC Super Mod at 5:00 AM