This is Colin Dickey.

Colin is the author of Cranioklepty: Grave Robbing and the Search for Genius. His fiction and nonfiction have appeared in Lapham’s Quarterly, Cabinet, TriQuarterly, and The Santa Monica Review.

He is also co-editor (with Nicole Antebi and Robby Herbst) of Failure! Experiments in Aesthetic and Social Practices. A native of the San Francisco Bay Area, he now lives in Los Angeles.  Author photo by Seth Sherwood. 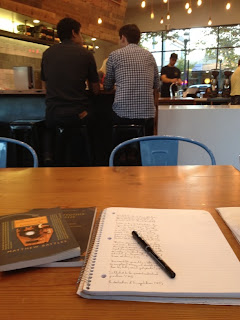 I write—habitually, necessarily, endlessly, pathologically—in cafés. Of all sorts—corporate coffee shops amidst commuters getting their morning double half-caff venti sugar-free lattes; hipster cafes with their hand-picked fair-trade small-batch really-expensive pour-over coffee; and every where in between. Mom and pop cafes that make terrible mochas and have décor left over from a hellish mid-80’s yardsale. Places packed to the gills with college students surfing the web. Places that were hip when Nirvana’s Nevermind was released and haven’t bothered to update anything since then. I can only spend a few hours at a time in any given coffee shop, which means that when I’m under a deadline I’ll hit three or four coffee shops in a day, starting in the morning and going until the last one closes at 10 or 11 p.m.  Which means in such cases I’m usually over-caffeinated and a little nauseous.

My writing life consists of wobbly tables, the barrista who thinks that playing Counting Crows on repeat is appropriate, west-facing windows that obliterate the world with sunlight in the late afternoon, a mental cartography of where the most electrical outlets are, and who has the best pastries.

I can’t write at home, which is a shame. But at home I’m surrounded by things that make me happy and distract me, and especially in the late afternoon my house makes me want to nap. Nor can I write in libraries. I’ve come to realize that places like that—quiet places like my house or a library or a place suited to writing—all have the same problem: a kind of stifling quietness, an oppressive weight that makes it more, not less, difficult to concentrate. 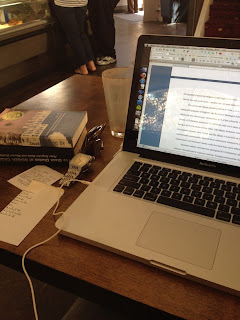 What’s important for me about coffee shops is the ambient noise and motion, the sense that things are going on around me. I tune most of this out with headphones, but even in the background it helps to remind me that the world is in motion, that the day is passing me by and I need to stay focused, and that someone is watching me play yet another game of Sudoku. It doesn’t matter if this isn’t true; it helps me to internalize the vague, disinterested stares of those around me.

The problem with writing at home is that it’s just me. Ditto with the library, where the goal is to obliterate anybody but you. But reading, at its heart, is a not-entirely-equitable relationship between reader and writer, between oneself and one or more perfect strangers. I love being in cafes because I never forget about that relationship, that there’s always someone at the other end of the page.

Check back next week to see where Claudia Chen finds her inspiration.
Posted by TNBBC Super Mod at 8:19 AM