Emmet O'Cuana Takes it to the Toilet 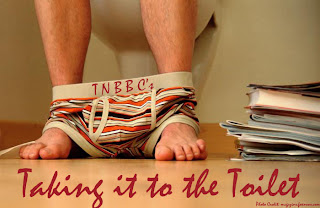 Emmet O'Cuana is a freelance journalist based in Sydney, who writes and hosts podcasts on The Momus Report. And today he's gathered the courage to engage in a little potty-talk.

There is a chap I know, a very talented artist and graphic designer based in Dublin, named Eoin Hamilton. Imagine if you will a mountain of a man, a Celtic Berserker born in the wrong time and forced to occupy himself with the pallid chaos of a metal bar mosh pit, but in repose a good hearted fellow with an infectious laugh. That's Eoin.

Our paths crossed several times during my late teens - I had not made much of an impression on him and generally had to introduce myself - but it was when he moved in with a mutual friend that I first became properly acquainted with him. Looking back on it all, I can say our friendship commenced when I discovered his choice of toilet literature.

On a lazy Sunday that had no right to be - a definitive college exam was taking place on the following morning, which I was drinking expensive Belgian suds to distract myself from - I sat in a smoky room that had become a home away from home. One particular long-standing feature of the room had been an impressive 'Byramid' - a pyramid composed out of beer cans. Although I cannot recall if it was still standing at this point in time - this tribute to many wasted nights is gone but not forgotten.

I suddenly launched myself upright from the comforting nicotine musk of the sofa and staggered out of the room in the direction of the toilet. Raising the lid I did my micturate duty, only to notice to my surprise an old friend shoved between the bowl base and the wall - J.R.R. Tolkien's The Lord of the Rings.

Not only was this the combined edition of all three novels, it was the same edition as the one I had read half a dozen times by the age of 15. I would read it yet again the week before Peter Jackson's film The Fellowship of the Ring was released in the cinema.

All this I could tell despite the forlorn condition of the book - cover missing, pages yellowed and curled. Now some might find the presence of this book in such a place shocking - but ask yourself, when forced to answer the call of nature, why not transport yourself to a land of elves, ambulatory trees and boozy hobbits, even while your insides conduct waste to its final destination. There's a line in The Big Chill - that breezy take off of John Sayles' far superior Return of the Secaucus 7, which has less popular tunes but does feature David Strathairn's naked arse - when sleazeball journalist Jeff Goldblum is criticized for writing pabulum which he claims is aimed at readers sitting on the toilet. Kevin Kline responds that people read Tolstoy on the toilet, only for the rebuttal to come 'Ah, but they don't finish it'. When I emerged I asked who owned the book and it turned out of course to be Eoin's copy, but he was still working on getting to Mount Doom.

And why not I thought.
Posted by TNBBC Super Mod at 5:00 AM