This is Isaac Marion. He was born near Seattle in 1981 and has lived in and around that city ever since. Deciding to forgo college in favor of direct experience, he dived into writing while still in high school and self-published three terrible novels before finally hitting his stride with Warm Bodies, his first published work. He currently splits his time between writing in Seattle and hunting inspiration on cross-country RV trips.

Personally, I adored Warm Bodies. (For those of you who haven't read it, For Shame! And also, Booo!) And I adore Isaac. I mean, beyond his obvious good looks, the guys got personality. Have you read his blog? In one post, when readers complain about his leading zombie's lack of zombieness in the upcoming film adaptation of his novel (yep, Warm Bodies is coming to the big screen), he basically challenges readers to learn the rate of decomposition by killing themselves. In another, he dissects the act of kissing. Seriously, world, what's not to love? He's also a badass artist - check out his paintings here - dabbles with photography, and is a musician to boot!

Ok, enough pimping. Let's let Isaac do what he came here to do, and that's show off his writing space: 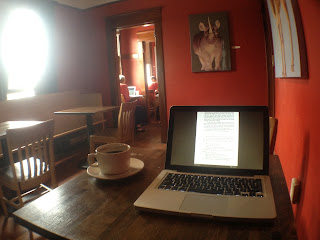 I can't write at home. It took me a long time to accept this, but after renting the nicest, coziest, most aesthetically pleasing apartment I've ever seen and setting it up to be the ultimate writer's lair with a big desk and comfortable chair and minimal distractions and finding that I still fled every day to the nearest coffee shop, I realized there was no escaping my wanderlust. There's just something about leaving the house that flips a switch in my brain, letting me know it's time to focus. If I write at home, it's way too easy to jump up and distract myself any time I hit a snag. "Hm, I'm not sure where this scene is going...maybe if I play piano for two hours and then eat lunch and then watch six episodes of Star Trek it will come to me." At a coffee shop, the options for retreat are very limited. I'm sitting at a table. There's nowhere to run.

My coffee shop of choice varies quite a bit. I wrote most of my first novel, Warm Bodies, at a huge place called Aster in the Ballard neighborhood of Seattle. I wrote most of my short stories at a tiny hole in the wall called Joe Bar in Capitol Hill. A few moves later, I've set up shop at Fremont Coffee in...well, Fremont. This place is pretty much my dream cafe because it has an unbelievable amount of table space, spread out through an amazing four separate rooms of window walls and shadowy nooks. This is the most important thing I look for in a work cafe. There's nothing worse than showing up ready to tackle a crucial scene and finding that the only seat available is the tiny one-person table placed right next to the front door. I'm borderline obsessive about where I sit. The Feng Shui has to be exactly correct. I have to be in a corner or at least against a wall, not too close to anyone else, but near a window. (I don't know how Feng Shui works.) I find it extremely hard to get in the zone if these conditions aren't met. It's ridiculous, but my brain knows what it needs and it's the one paying the bills. I don't argue with it.

The whole concept of writing at a coffee shop is ridiculous, really. I require absolute focus and don't want any human contact disrupting my concentration, so I go to a public place with a constant flow of human contact? It doesn't sound logical, but I've found it creates a certain ideal mix of solitude and stimulation. Even though I don't want to talk or interact with anyone, it's somehow still inspiring just to be around people. The background layer of noise and activity keeps my left brain occupied, leaving my right brain free to do its work without the left whining "I'm bored!" And perhaps most importantly, the human contact--even though it's indirect and barely registers--allows me to spend hours a day inside my own head without going insane from isolation. That faint aroma of humanity is enough to keep loneliness at bay while I'm deep in the mines.

Come back next week to see where Michael Kleine (author of Mastodon Farm) writes.
Posted by TNBBC Super Mod at 6:58 AM