A Crash Course on the Anatomy of Robots (Blog Tour)

Welcome to Stop #7 for A Crash Course on the Anatomy of Robots blog tour. 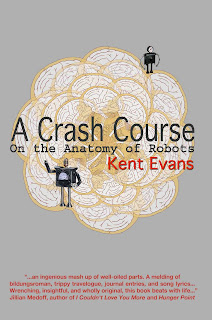 I typically do not host a leg of a blog tour for books I haven't read. But I enjoy working with JKSCommunications and thought A Crash Course on the Anatomy of Robots sounded like something I could totally get behind (even though I knew I could never review it in time for its release).

Here's what goodreads says about it:


Damien Wood's path to adulthood in the last decade of the 20th century is marked with effortless success - creative, financial, sexual. Yet, his half-Asian lineage with its inherent cultural clashes is coupled with the inability to be touched by feelings or the people around him. Damien's efforts to reach his inner self take him from place to place and one hollow relationship to another, but he remains stuck outside of his experiences, a robot convincingly playing the role of daredevil artist and globetrotter.

Then, the century turns. As Damien's mother dies after a long and agonizing illness, and 9/11 inaugurates a reign of fear and terror, his emotions, from desire to despair, begin to emerge unbidden. These birth pangs of humanity send Damien on a mordantly comic, darkly suspenseful quest from the Americas through Southeast Asia in the company of an expatriate colony with too little to lose - including values - until violence comes to claim him as one of its own. No longer a robot, Damien has become a wanted man...

The original soundtrack for A Crash Course On the Anatomy of Robots was written and recorded at On Studio in Guanajuato, Mexico. The album will be available on iTunes prior to the release of the novel and come free as a companion piece with the Kindle version.


Today, you're treated to a guest post by its author, Kent Evan, in which he discusses how he created the soundtrack for his book:


Incorporating music into a novel

Late last year I started writing the music for what would become the soundtrack to my new novel with my experimental drum and bass progressive funk metal collective We’re Not Vampires. I have often used music as a bridge between spoken word and writing, and in the beginning this was no different.

Me, Moises Ruiz and Benjamin Santana were playing out quite a bit and more and more I began to incorporate pieces from Crash Course. When we started talking about the novel coming out later this year, I was already in the studio working on a soundtrack for Bermudan director Antoine Hunt. I had recruited Ramon Hernandez from Barro Negro and Mike Severens (GTO orchestra, and Tom Petty, among others) to bring in drums, bass and cello respectively. Moi provided some additional production, as did my best bro and longtime collaborator Kienyo (DJ Sujihno from Nossa).

My approach to music is similar to my approach to writing, or to cooking or dancing, or any other creative form of expression for that matter. I take what I’ve learned over the years and approach it from the heart - from a gut level. I initially wrote all the guitar riffs, and then jammed em out with Vampires. They grew organically from there, and the excerpts from Crash Course just sort of popped out of the text screaming to be married to them. After that, Ramon worked really hard to help me realize my vision in the Studio, and Michael added the almost epic component we’d been missing with the Cello.

Once we started playing it just fell into place and seemed like a perfect fit for the iReader version of Crash Course to best utilize both the technology and showcase myself as a multi-platform artist. When you buy certain versions of the novel electronically it gives you the option to hear those pieces narrated/performed with musical accompaniment. More traditionally, if you buy a physical copy of the novel, you can either download the album from all major distributors, or order a physical CD from Amazon. For a novel with Robots in the title it only seemed natural to embrace the benefits that come with new technology.

The result is something I’m really proud of, and I think is really hard to fit in a genre. The iReader with embedded music and narration is something that has almost never been done, and I think both Crash Course the novel and the soundtrack defy easy categorization. On one hand we have an experimental Fictional Memoir told in everything from 3rd person narrative to direct conversations with the reader, and on the other we have a Spoken Word album that flows between Rock, Trip-Hop, and jazz in a natural way that has rarely been executed on this level. Together, they create a unique reader/listener experience that I think people are going to be surprised and intrigued by.

For the tour starting September 18th (Northeast, South, Texas, California) I’ve got some great musicians like Carl Restivo (Tom Morello’s Freedom Fighter Orchestra, Rhianna), Drew Trudeau and Anthony Valenzisi (Lions of Judah, Sicboy), Laura Wilson (Gypsy Fiddler extraordinaire), country singer and guitarist Johnny Hunt, along with some surprise guests who are gonna help recreate and re-interpret the album. In this way, the project continues to change and grow, and keeps me interested as an artist. I’m lucky that I’ve been able to take two of my great loves, writing and music, and been able to able to combine them in a way that I, and hopefully others, will enjoy.

Kent Evans is the author of Malas Ondas: Lime, Sand Sex and Salsa in the land of conquistadors, a semi-autobiographical novel about self-destruction throughout Latin America and finding that corniest of motivators – love. He was a fixture on the spoken word and experimental art scene throughout the 90’s and is currently pursuing his artistic craft through music and fiction.

A Crash Course on the Anatomy of Robots released September 17, 2012 from Pangea Books. Half Cantonese and half UK, Kent was born in New York City in 1975 and grew up between New York, Connecticut and Rhode Island. He fully expects to answer that “but where are you really from” question the rest of his life.

You can follow the tour here on September 25th.