.. at Brooklyn's Book Thug Nation was a bust. 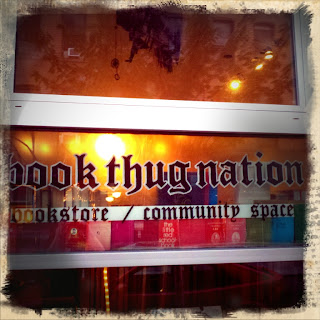 I had started promoting the event a couple months back. I threw together a flyer, designed a cute tri-fold to hand out at the event, special ordered Tshirts for David Maine and me to wear during the reading, and sent out personal invites, mass event invites, and event reminders through Twitter, Facebook, and Goodreads.

I'm not sure what else I could have done to hype it up. And it's sad-making, because David Maine is an awesome author and I feel like Brooklyn really missed out on something good last night.

Yesterday was my first time visiting Book Thug Nation, our host space. It's this teeny little bookstore on N 3rd street in Willamsburg, Brooklyn. Barely larger than my bedroom, it sits beside an antique shop and directly across the street is this great little German bar that David and I slipped into, grabbing a celebratory beer before the reading began.

While sitting in the bar, my cell phone started getting hit with cancellations from the few people I had personally invited and had been really excited to see. Oh No, I thought. This does not bode well. And while it's always wise to be prepared for things like this, I don't think you can ever prepare yourself ENOUGH...

We head back over to Book Thug Nation, help the store associate set up the chairs, and while David grabs a seat in preparation, I scout the sidewalks to see who's coming and talk up the reading to a few of the browsers. One local, Anna, took an interest in hearing more about the book and the three of us chatted for a bit about music and books and mass-consumer-madness. 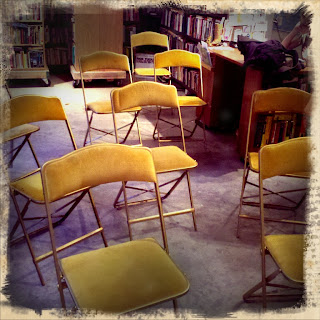 Eventually, the store associate asked if anyone else was coming. She was itching to open the store back up to the public before she had to close for the evening. We had an audience of one, and David had no one to read to. Dejected and humiliated, I thanked Anna for hanging out, apologized profusely to David as I helped fold up the empty chairs, and asked for directions to our separate subway lines.

After David and I said goodbye, I walked down the length of Berry St toward the L running everything through my head. I considered chucking in the towel. I replayed the conversation David and I had on our way to the bookstore earlier that evening - where we discussed the power (or lack thereof) of social media, blogging vs professional newspaper reviews - and how certain I had been that voices matter, no matter how small, so long as there was an audience for them. I thought about how he had tried to prepare me for tonight's event by making sure I had set "low expectations", and I thought that no one could ever their expectations low enough to prepare for a turnout of ZERO people. I felt like a failure. I felt like everything I had ever done up to this point was for shit. For nothing. For no one. Who was I kidding, I had no audience! No one was listening to a fucking thing I was saying! I was talking to empty space. But worst of all, I felt like I had let  David down. And that bothered me the most.

So, it's the morning after, and while I continue to struggle with feelings of frustration and humiliation and gag on the ginormous heap of humble pie the universe served to me last night, I know that I am going to continue to fight the good fight for exceptional literature. I won't back down and play dead, I won't quiet my voice, I won't give up on spreading the word about the authors I enjoy and the amazing stories they have to tell... because I can't.

Now excuse me while I burrow back under the covers and continue my pity-party-for-one. I'm not quite done feeling sorry for myself.