Tell Me A Story: Ryan Bradley 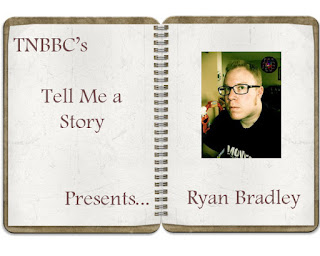 Welcome to another installment of TNBBC's Tell Me a Story!
Tell Me a Story is a monthly series that will feature previously unpublished short stories from debut and Indie authors. The request was simple: Stories can be any format, any genre, and any length. And many amazing writers signed up for the challenge.

This month's story comes from the hands of Ryan Bradley. Ryan is the Co-Publisher and Editor of Artistically Declined Press, Creater of Aesthetically Declined Design, and author of the recently published Prize Winners, as well as a poetry chapbook title Aquarium. The story he shares with us today is part of a short story collection he is currently shopping around. I hope you enjoy it.
~~~~~~~~~~~~~~~~~~~~~~~~~~~~~~~~~~~~~~~~~~~~~~~~
Trench Swimmer
The vapor flare cracks, makes it sound like I’m under a jumbo jet, instead of on a pump station pad in the arctic. The Mud Dog is my truck. Says “Fido” on the driver’s side door. I’m dressed in rain gear, the rubber pants swishing between my thighs. Water’s building up in the north trench and there’s nothing I can do about it.
Danny lumbers back from the 9-hole, a set of port-a-potties enclosed in a shack. We stare over the edge. The trench was twenty-six inches across and four feet deep when we dug it. Now the sides are caving in and the bottom is silting. The electricians won’t be able to lay cable at this rate.
The twelve volt water pump is on the fritz again, and we’re both plumb out of ideas. I grab a bucket out of Fido’s side hatch and toss it to Danny, still looking at his two-day stubble in the ground water reflection.
“You know what to do,” I say over the whip of the flare.
Back at Danny’s side I kneel down and peel off my left boot. A hundred dollars down the trench, I think and dip it into the rising water.
Danny and I dish the water frantically out of the hole, cussing the damn sparkies and their cable.
“I got a cable I’ll lay for ‘em,” Danny says.
When we get back to camp tonight I’ll borrow a company truck and head into the general store in Deadhorse. Buy myself a new pair of boots. Other than that it'll be the same thing tomorrow. Wake up at four, on the bus at five, to the pump station by six. Danny and I'll be driving the Mud Dog, sucking dirt and permafrost to make way for cables, all so we can fill it back in when the electricians are done.
"Dare you to swim it," I say, not even thinking about the words that are coming out of my mouth.
Danny looks up at me with a slack-jaw expression worthy of a steelhead that's just been pulled out of the water. "You losing it?"
"Just trying to break the monotony." Suddenly I'm overwhelmed by the sheer routine of the job.
"You want to break the monotony so bad, why don't you swim it?"
Before he can start his half-chuckle half-smoker's cough, I'm peeling off my other boot, and throwing off the rain gear.
"You have lost it," Danny says, standing up from the edge of the trench.
I don't say a word, just keep stripping until I'm in my gray underwear, goosebumps forming all over my body. I put my hands together over my head like a swimmer you’d see in the Olympics or something and dive in. When I hit the water all these thoughts rush through my head. Like how I'll probably lose my job. Or how I'll always be known as the trench swimmer. It'll become a tall tale. Guys doing this work for years to come will tell the story, each year making it a little bigger, a little more spectacular.
They'll use the story to forget about digging trenches twelve hours a day, seven days a week. I close my eyes against the silt and mud. My skin, my insides, feel like layers of permafrost. It's worth it, I think, wondering how long I can stay under before I'll have to rise to the surface for air.
~~~~~~~~~~~~~~~~~~~~~~~~~~~~~~~~~~~~~~~~~~~~~~~~~
I want to thank Ryan for participating in TNBBC's Tell Me a Story. If you like what you've read, please support Ryan by checking out his website and books. Help spread the word by sharing this post through your blog, tumblr page, twitter, Google+, and facebook accounts. Every link counts! And be sure to check back with us next month for the next installment....
Posted by TNBBC Super Mod at 8:00 AM