Review: Scars on the Face of God 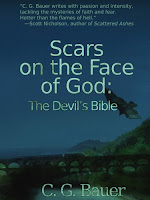 I have wanted to read this book for a long, long time. I spent uncountable hours searching bookstore shelves, library sales, used book sales... all for nothing. It seemed like this book and I were just not meant to be.

Until, on a whim, I reached out to it's author and asked for a copy to review here on the blog. A huge thank you must go out to C.G. Bauer for suppling me with a copy of his elusive novel!

Initally set in Pennsylvania at the turn of the century, two young boys from the local orphanage are out in the early morning collecting frozen piles of dog crap (oh yes, they were) when they spy a woman carrying a small , squirming bundle across an enclosed bridge. As they watch, the woman throws the bundle into the river, followed by a gunshot. One of the boys, Johnny, dives in after the drowning baby, and believing he has retrieved it, carries it back to the shore, where he hands it over to his friend. As they unwrap the bundle.... They realize that what they had just witnessed has happened before - many many times before.

Foward 50+ years in the same town, and Johnny, known to most as "Wump", finds himself reliving the horror of that morning all over again when tiny baby skeletons are found floating in the sewer-water that has suddenly flowed into a hole that's been dug out for the foundation of a new restaurant.

In the midst of this, the town acquires a new priest, Father Duncan. He and Wump, along with two disabled boys, Leo - a mentally handicapped boy - and his blind, mute, wheelchair-ridden best friend Raymond, launch their own personal investigation into the town's deep dark secret regarding the dead babies, and the mysterious Devil Bible which they find in the possesion of one of the nun's in the orphanage.

Scars on the Face of God is a slow, southern-style gothic tale that manages to creep and crawl deep under your skin. Author C.G. Bauer tears religion apart and attempts to put it back together using the conflicting beliefs of Wump and Father Duncan - two men with very different views on God, and God's part in creation and the suffering of human kind.

Creating characters with incredibly flawed personalities, Bauer used their damaged pasts to show why each man felt the way they did about the Catholic Church. Father Duncan, an ex-professional baseball player, heard the call to religion and puts his faith unquestionably in God and the church. Wump, on the other hand, lived life according the rules of the church and lost his faith after watching his son needlessly suffer and die of Lukemia.

A powerfully chilling novel of what the power of religion can do to a small, poor town. And what faith, or the lack thereof, can do to each of it's inhabitants.

I thoroughly lost myself in this novel, and I strongly urge you to do the same!
Posted by TNBBC Super Mod at 8:39 PM