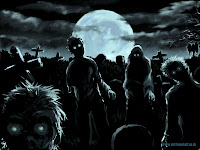 The leaves are lying on the lawn; the air is brisker, cooler; the days are getting shorter; the smell of burning logs escapes our neighbors chimney... There is no denying that Fall is officially here.
And with Fall comes every child's favorite dress-up holiday: Halloween. Which, of course, gets me thinking about some of the creepy, crawly, twisted, terrifying reads I have ever read.
I usually take time during the month of October to indulge in a seasonal book reading binge - where books containing Vampires, Werewolves, Ghosts, Monsters, Witches, or Magic get bumped to the top of the TBR pile. This year will be first year, due to my review priorities, that I won't be able to read October Themed novels. So, instead, throughout the month of October, I plan to showcase the best of the best scary stories I have read over the years...

Starting with this one:

(Read Dec'2007)
4 Stars - Strongly Recommended
Pgs:224
Looking for a scary book you can read in one sitting? Try out Come Closer by Sara Gran.

It's quite short, barely 200 pages.. and a terrifyingly quick read. I think I worked myself up about it a bit too much, based on the reviews I had read.... afraid to start it until I was sitting in full daylight, fearful that it would be way too creepy and have me sleeping in bed with my kids....too chicken to risk a nite in bed alone...
Chilling and creepy, sometimes leaving me with that tingle-up-my-spine feeling...

A very cleverly, conversationally written book about a woman who slowly and knowingly gets posessed by a demon, slowly sinking into its clutches...

I would recommend it to anyone who is looking for a quick, kinda-creepy read that is unlike much of anything you've read before.
Posted by TNBBC Super Mod at 8:13 PM