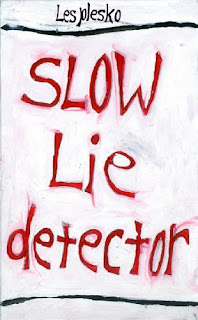 Read 10/13/10
4 Stars - Strongly Recommended
Pgs:148
I wasn't always sure where this book was headed, what the characters were doing, or even what their purpose was... But I loved the ebb and flow, and the amazing sentence structure. Les Plesko's chapters were a short page and a half each, the words woven together so fluidly that I had finished reading the novel before I had even really begun.
The cover caught a lot of attention. I was reading it at the gym while my kids were practicing their Jiu Jitsu, and though I read there every night and no one usually says a word, on this particular night everyone was asking what the book was about. They wanted to see the cover, feel it, they were interested to hear what it was about. They saw me jotting down notes and asked to read them. I was slightly embarrassed and secretly thrilled that a book could draw so much attention - at a GYM no less!
Les Plesko's novel doesn't need a summary, heck - it doesn't even have a cover blurb, it really doesn't matter what the story is about. But I can't look at someone and say "I just read the words and let them take me where they will".
So if I had to sum it up, here is what I would say:
It's about this guy, Max, who wants to make a film. A film about real things. A film that catches every moment of everyone's lives. A documentary of life. And while he is driving and filming out the window of the car, he stops and picks up this chick, Winn, who he falls for, but she is married to a sailor. Somehow her sailor husband tracks her down, and finds her with Max. And then there's this weird love triangle between Max, Winn, and her husband. Then Max knocks up Winn, and her husband accepts this, until Winn has the baby, and tells her husband that the baby looks like him, which pisses him off and he leaves.
The story then follows the roller coaster of a relationship between Max, and Winn, and their very many additional 'partners'. It deals with infidelity in such a real yet abstract way.
Don't let that be the selling point though. Take a look at the writing:

"The best understanding that he had of himself was always second hand".
"Bad thoughts were alright, only what you did counted, not what you thought, how you felt".
"Did you drink because you felt bad, or did the drinking become the badness"?
"He did ordinary things that were made extraordinary from it".

The novel takes each character's personal emotions and exposes them for everyone to see. The author cracks open each person's chest, and allows the reader to pull back the skin and crawl inside. To live in the moment with them. To know what they think, and what they feel, and why they act the way they do. His characters are vulnerable, and honest, and as real as his words can make them. They are ugly, damaged, ruined people - these characters - and they are unapologetic. They are human, and make mistakes, and accept each others faults.
And that is what makes this novel such an amazing read.
Posted by TNBBC Super Mod at 5:14 PM