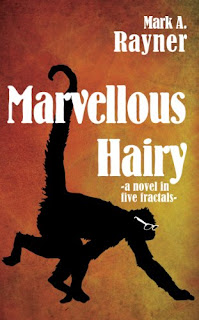 Read 10/5/10 - 10/9/10
3.5 Stars - Strongly recommended to readers familiar with genre
Pgs:263
Mark A. Rayner is an author with a fantastical sense of humor and a dangerous imagination. Part big corporation take-down, part scientific bizarro experimentation, this novel is perfect for fans of the strange and unlikely!
Full of mayhem, madness, and monkey-business, Marvellous Hairy takes the reader on a roller coaster of a ride through the many layered friendships of Nick, a man who is willing to sell his body to science for a couple of bucks; Max, a doctor who takes recreational drug use to the next level; Hot Helena, who works as a VP for Gargantuan Enterprises and it's slightly insane head honcho Ted; and our narrator Rob, BFF to Nick, our monkey man in the making.
Mix in some unauthorized highly secretive genetic manipulation, a ghost haunting, two kidnappings, and a pair of unstable drug dealers, and you now have a recipe for disaster.
While reading the proof for the novel, which was signed and sent to me by the author upon my request for review, I found myself overlooking the editing issues (hence the reason I noted it was a proof copy) and thoroughly enjoying the storyline.
The back cover blurb leads the reader to believe the novels sole plot is to follow Nick Motbot through his transformation from man into monkey, however there really is soooo much more to it than that.
Rob worked as a temp on a super secret scientific project involving a weather satellite at Gargantuan Enterprises, when he discovers his best friend Nick has signed on with the same company for some experimental testing. Concerned for his friends well-being, and increasingly strange behavior, Rob enlists the help of the company's VP of Marketing, and his old college buddy Helena, to root around and dig up information on the classified test.
The group of friends stumble upon some pretty unethical and downright scary stuff, and decide to take matters into their hands - Kidnap the CEO, publicize what they know to bring the company crashing down around his knees, and hopefully save their banana-loving, bow-legged, devolving buddy at the same time.
How can you NOT want to read this??
I want to just take a moment to clarify something:
The novel is marketed as "Literary Fiction" under the subcategory "Fabulist Satire" (as found on the back of the book), and I think it's for good reason. Readers who like straight up, no nonsense fiction may find themselves confused and frustrated with the crazy capers and high-jinx that populate this novel. Those readers who love to indulge in a good old medical mystery novel might find themselves tsk-ing and tut-ing over the numerous other story lines that flow throughout the book. 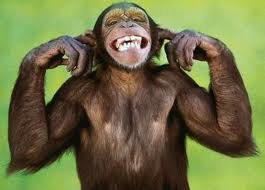 That being said, Rayner's novel is romping good fun, and begs you to pay more attention to your inner monkey and lizard - the normal animalistic parts of the human psyche that we force into submission! Everyone... It's time to "Release the Monkey's"!!!
Posted by TNBBC Super Mod at 1:47 PM