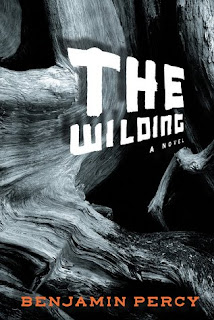 Read 9/11/10 - 9/18-10
4 Stars - Strongly Recommended
Pgs:258
Dark and suspenseful, a bit twisted, and certainly not for the weak of stomach, The Wilding is going to make you think twice about camping out in the woods!
Graywolf Press sent me the arc for this novel quite a few months ago. The premise - grandfather, father, son, and dog head deep into Echo Canyon for one last camping trip before it's destroyed and replaced with an Indian Casino - caught my attention and something about the title and the blurb whispered "creepy read"....so I added it to my review pile and there it sat, patiently awaiting it's turn to be read.
About two weeks ago, Graywolf surprised me by sending me the Hardcover edition of the novel, which goes on sale next week. When I thanked them, I was informed that the author was going to be reading from the book at the Brooklyn Book Festival (which took place on Sept 12th, and of which I was already planning on attending!).
To the very top of the review pile it went!
I had the fascinating pleasure of listening to Benjamin Percy read a chapter from this novel (during the BKBF panel entitled "What Fresh Hell is This" - and what a fitting title name that is!) while I was still in the process of reading the book myself. His deep and booming voice stuck with me for the remaining days as I finished reading his novel. In my head, I could hear him narrating as the characters moved through their strange and terrifying experiences within Echo Canyon.
This novel is a tricky little devil. The suspense builds from page to page, at times creating a nail-biting urge within me to shout out loud through the pages to the characters to warn them of what I am afraid is coming. There were moments of false build up, where I felt myself release a breath that I did not realize I had been holding. And other moments where Benjamin twisted and turned me down a path I was not expecting.
A good portion of my teenage summers were spent camping out in the middle of the woods that was interestingly named Devil's Hole. Waterfalls and a decrepit water mill stood hidden, deep in the woods, in the middle of two developments. My friends and I would rough it out there - no tents, certainly no weapons, just sleeping bags, blankets, hamburger meat and hot dogs to cook over the fire, and some cheap booze to keep us warm when the stars were twinkling in the cool dark of night.
Never once did we think we were putting ourselves in danger of a bear attack, though we knew the area was crawling with wildlife, and luckily one never crossed our path out there. And I count those nights in Devil's Hole as some of my fondest memories. However, after reading The Wilding, I doubt I would ever venture out into the middle of the woods again, at least not without the proper protection. Or let my children have similar experiences as they get older, for fear of what might be waiting out there for them.
Benjamin not only scared the camp-girl out of me, but he also played around with the human / animal element throughout his novel.
Owls can be found throughout the story - one falls down the chimney of our main character Justin's fireplace, flapping its smoking wings throughout the house until his wife ushers it out the door. Others can be heard in the woods when Justin, his father Paul, and his son Graham are sitting around the campfire in Echo Canyon. According to owl lore, they are thought to symbolize dread and death, and I do not think it is by accident that Benjamin included them in his novel, since dread and death are abundant and at the very core of this story.
While camping out in the canyon, our three men hunt for deer, and happen to shoot and track one down into a bone graveyard. As the men stand over the dying deer, preparing to gut and skin it, they realize that the walls of the cave they are standing in houses caveman-like drawings that mirror their exact situation. Some depict men holding spears, others show men attacking a bear, some are very old, while others look fairly new. Though the scene was quite gruesome and heartwrenching (the deer in his final moments, the son asking if deer know they are dying), there was something poetic and ... normal... about that moment. A history of man vs animal laid out before them, the survival of the strongest, or smartest. The thrill of the hunt, and the excitement of the kill.
The Wilding will have you locking your doors, replacing those burnt out flood lights around the house, and carrying a flashlight when you head out for your late night strolls. It will keep you huddled around the campfire, if you're brave enough to go camping at all. One thing I know for certain - It will keep you up late into the night as you refuse to put the book down, and find you pulling those covers up around you tightly.
Posted by TNBBC Super Mod at 2:58 PM