BKBF Was Wet and Wonderful 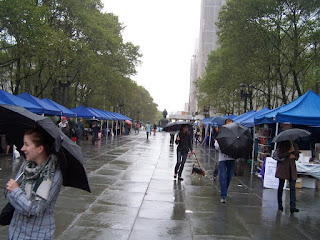 Weather report: 30% chance of rain, high of 71
Actual weather: wet, windy, and chilly, high of 55 (if we were lucky)
As you can see from the photo above, the 2010 Brooklyn Book Festival was a damp and soggy event. This photo was taken around the 5 o'clock hour, with one last set of panels to see, ending in one last author signing, and the crowd was visibly thinning out.
The weather, however, did nothing to damper the bookish excitement and anticipation of meeting authors, publishers, and fellow book bloggers!
The week leading up to BKBF was a stressful one for me. Constant monitoring of the weather (lots of good that did me!) and the festival's website found me attempting to create a schedule with the perfect balance of author panels, author signings, and time to wander to my favorite publishers booths. Jamie, from The Broke and the Bookish and The Perpetual Page Turner, and I were emailing each other back and forth like maniacs, figuring out when and where to meet and planning out our day together. Jamie has been a member of TNBBC for 2 years and I couldn't wait to meet her in person.
The morning of the festival arrived, and found me driving out to the city before the sunrise. I parked at Port Authority (a pro at this now, thanks to my experience during the BEA's back in May) and walked myself over to Penn Station to await Jamie's train.
Jamie had a horrible morning, missing her original train and parking in a tow zone to boot!! But she made it! And she brought along Lenore, of Presenting Lenore, and Lenore's husband Daniel, who is an illustrator for children's books.
We took the subway from Penn Station to the Festival and got ourselves situated as best we could. By now we were starting to feel the beginning drops of what would eventually become a very damp and uncomfortable day!
We stopped off at Le Bagel restaurant for some coffee and bagels, and sat down on the steps of Borough Hall to eat as the festival began. On the main stage we watched this amazing little kid recite the Jabberwocky poem - from Alice in Wonderland - from memory. And how cool is this? I made it onto the news footage of the festival. While we were sitting there, a news crew shot some scenes and if you watch the first 3 seconds of the clip, you will see me sitting on the lower far right hand corner of the screen, chit chatting with Lenore and Daniel. Jamie had stepped away to take a phone call and missed her 3 seconds of fame! 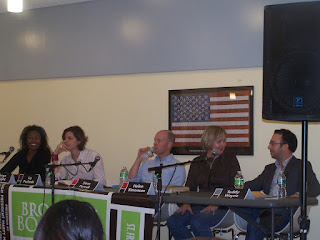 The first panel Jamie and I attended was the 11 o'clock NEXT TEXT panel - which included Tanya Wright (Deputy Kenya from True Blood!), Ivy Pochoda, Sean Ferrell, Helen Simpson, and Teddy Wayne.
Sean pronounced himself The Leader based on his position at the center of the table and ordered each one of us to get him a root beer. "And I don't mean each of you collectively getting me one root beer. I mean each one of you get me one root beer!". Watch out for this guy! He's gonna be huge! 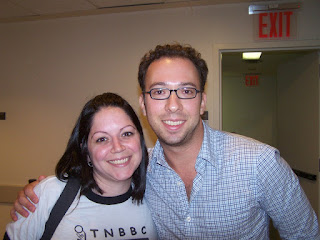 Teddy Wayne blew the crowd away with his very well chosen selection from Kapitoil. Every paragraph solicited laughter. I will not lie. Teddy was one of the reasons I had attended BKBF in the first place. He and I met back in May during the Book Blogger Convention Reception, I recently reviewed his novel, and he had so wonderfully participated in an interactive interview with the members of TNBBC. I went all fangirl on him when he remembered me at the signing tables, and we chatted for a minute before I asked if would take a picture with me. What a sweetheart! 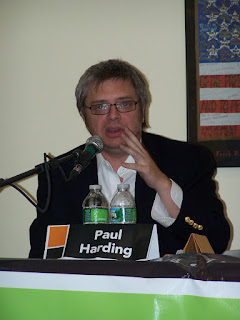 At noon, Jamie and I split up. She went to see Rob Sheffield's panel while I stayed put to hear Paul Harding read from his novel Tinkers for the LIVING THROUGH DYING panel. When the readings were over, I took the opportunity to ask the authors, since all of their novels dealt with death, which way they would prefer to die -were they given the choice- and which way they were most terrified to go. My question was received well and was even turned back to me, so that I had to answer! I learned so much more about what went into the creation of Tinkers, which helped me to appreciate it,not only as an exceptionally well written piece of fiction, but also as a glimpse into the not so fictitious history of the author, of which his novel was based.
After that signing, Jamie and I met up again and wandered through the rainy and windy vendor booths. I stopped by to say hello to the friendly staff at Graywolf Press, and we chitchatted with Erica and Amy from Harper Perennial, two of the most hardworking marketing women I know!
We also got the chance to put faces to names with a few other fellow bloggers during a slight break in the weather. Nicole from Linus's Blanket, Allie from Hist-Fic Chick, Mitali from Alley of Books, and Spencer from 59th and Peach. She and Jamie know each other from Jamie's college student group on goodreads. Spencer was a ball of personality and I was so glad I got the chance to meet her! She and Jamie took off to the Youth Stoop at 2pm, and I headed over to the WHAT FRESH HELL IS THIS panel to see Benjamin Percy reading from his new novel The Wilding. God does that man have the deepest, most booming voice I have ever heard! I was thrilled to have him sign both the arc and hardcover of his novel!
Jamie, Spencer, and I left the Festival at 3pm for a starbucks coffee and some horribly overcooked KFC for lunch and then said our goodbyes to Spencer as we made out way back out into the wild wet weather to see Per Petterson read during the BEING IS SCARY set. His novel, I Curse the River of Time was one of my favorites this year, and hearing him read from it was heavenly. Sadly, Per was not signing at the end of this panel so my books went home unsigned.
However I did manage to visit Salman Rushdie, Dennis Lehane, and Simon Van Booy and get their novels signed (though I did not see their panels. Choices, Choices!) 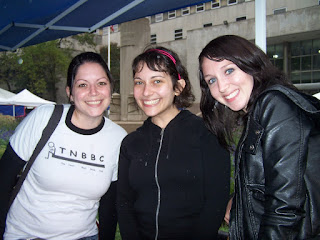 Before we left, Jamie and I headed back over to our favorite publishing lady Erika to say our farewells. We all looked like wet dogs at this point. Poor Erica and Jamie were shivering. But we survived the day, and had a wonderful time, and made promises of meeting soon in NYC to take the literature world by storm once again!
Posted by TNBBC Super Mod at 7:54 AM