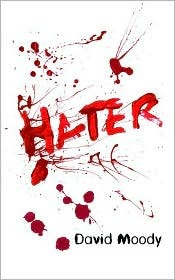 Read 9/18/10 - 9/24/10
5 Stars - Highly Recommended/ The Next Best Book
Pgs:281 (Book one of the Hater Trilogy)
When a book begins with a man brutally gutting a female stranger with an umbrella, I'd say "Buckle those seat belts, readers! Looks like we are in for one helluva ride!".
David Moody, author of the novel Hater, paints a grim and twisted picture of "us" against "them", a world where people have to learn to live in fear of being suddenly and violently attacked by strangers, coworkers, and loved ones. It can happen almost without warning. And no one knows for sure why it's happening. Or how to stop it.
Imagine walking to work, and finding yourself a witness to a seemingly unprovoked street fight. You watch in awe as one person beats the other unconscious. And continues to beat him. You are one of many within the crowd, yet no one moves a muscle to come to the others defense.
Later that week, you and your spouse and children are eating dinner out at a restaurant. Before you can clean your plate, you watch in horror as two people at the bar suddenly engage in a violent fight that ends when one man brutally stabs the other with a steak knife. Everyone is paralyzed with fear, not sure what is going on, and urgently heads for the front doors.
When you get home, you turn on the television to see news reporters covering multiple acts of violence that have been occurring around town. They seem unrelated, though they sound so much the same - random, sudden, brutal, unexplainable. The body count is climbing.
You think that the news is playing a part in all of this - sensationalizing the murders, encouraging others to go out and instigate more of the same with little to no consequence.
A few more days pass... you can't seem to head outside without watching people attacking each other. They seem to turn on a dime. One minute they are walking by you, or having a normal conversation with each other, and then there's this blank stare and then BAM - you are fighting for your life as they thrash and slash and smash you. Now the news reporters request you do not leave the house unless absolutely necessary. They suggest creating a "safe room" for you own protection. They warn you to be wary of people who display any signs of anger or aggression. They say they have it under control. Yet no one is saying what exactly is happening. Stores and cars are being looted. It's not safe to go outside... but DON'T PANIC?!?
Written in first person narrative, David Moody sucks the reader right into the middle of the confusion and chaos that is taking place. We know only what our narrator Danny knows, which, for most of the novel, is not much. Unable to process what is going on, Danny and his family move through myriad emotions as the violence and brutality increases, and moves closer and closer to his front door.
What I find most amazing about this novel is the fact that it's author self-published it online back on 2006, and sold it's film rights to Gueillermo del Toro, all without the help of an agent! How could any publishing company have turned this away?
Packing punch after punch, chapter after chapter, Moody kept me turning the pages faster and faster, and I found myself on the edge of the seat time and time again.
You've seen vampires, zombies, and nuclear bombs that helped issue in the end the world as we all knew it. Now it's time to meet the Haters!
A brilliant kick-off novel to a trilogy that screams to be read by lovers of post apocalyptic novels with a strong stomach and a head for thrillers.
Go ahead, get your Hate on! I dare you!
To learn more about David Moody and his novel, check out these links: