This is Julie E Justicz.

Julie earned a law degree from the University of Chicago and received an MFA in creative writing from Vermont College of Fine Arts. As an attorney, advocate and writer, Julie currently works on civil rights issues in Chicago. Her first novel, DEGREES OF DIFFICULTY (Fomite, 10/1/19) earned a starred Kirkus review. She lives in Oak Park, Illinois with her spouse, Mary, their two kids, and two dogs. Learn more at http://www.juliejusticz.com/ 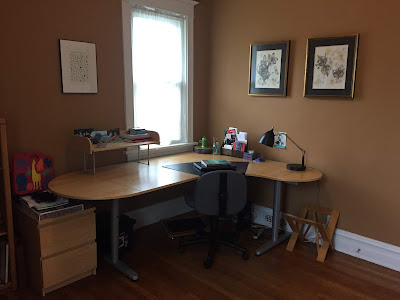 Where do you write?

Trying to answer these simple questions, I battle the same insecurities that accost me when someone asks what’s my novel about: Will it interest anyone but me? Can I pass the secret literary society test of gravitas? Or will I be exposed as a hack—another dilettante with no right to put pen to paper, fingers to keypad? Do I even deserve “money and a room of (my) own?”

On a good day, my office on the second floor of the old house that I share with my spouse, two kids, and two dogs, could be the habitat of a serious writer. Procreant clay-brown walls are graced with inspiring art: Two of Nancy Blum’s floral Spirograph works, a framed Tom Gauld drawing entitled: Characters for an Epic Tale, and a sepia photograph of an uncharacteristically bookish Amelia Earhartt. Two maple bookshelves are filled just beyond capacity with the works of my favorite writers, including Alice Munro, Marilynne Robinson, Ian McEwan, Jesmyn Ward; the lowest tier holds several books that I should have read by now, but somehow have never completed: James Joyce’s Ulysses, a translation of Gunther Grass’s The Tin Drum, and most embarrassingly, Virginia Woolf’s To the Lighthouse. A slim laptop and a journal beckon me from the clean desktop. Come, sit, write. On a bad day, open my office door and watch out. Don’t trip on that broken toilet seat. Don’t slip on the scattered bills and bank statements waiting to be filed. Avoid the pair of running shoes, smelly socks, and a tangle of electrical cords under the desk. Careful with those three half-empty coffee cups next to the laptop. Speaking of next to the laptop . . . what’s with that can of Dr. Scholl’s “odor fighting foot powder?”

I’d like to think that I have more good days than bad days. Sometimes I tell myself that it doesn’t matter what’s strewn across the floor or on the desktop, that once I’m seated, I’ll get to work putting words on the literal or virtual page. But it turns out that the state of my office is a surprisingly accurate predictor of my ability to write, as well as a concrete manifestation of my writerly self-worth. When I am feeling creative, ambitious, ready to pound out the pages, my office greets me, tidy, clean swept and inviting; maybe a half-dozen fresh cut daffodils stand in a mason jar next to my keyboard. When I am out of synch, stuck, haven’t written in days, maybe weeks . . . well, the clutter accumulates and breeds. My office, never stoic, wears its loneliness and neglect like war wounds.

Turns out that the best way for me to jumpstart the process, to get a few pages written (and I swear this is not pure procrastination) is to start with a thorough cleaning of my room.