Chris Bauer's Would You Rather

Bored with the same old fashioned author interviews you see all around the blogosphere? Well, TNBBC's newest series is a fun, new, literary spin on the ole Would You Rather game. Get to know the authors we love to read in ways no other interviewer has. I've asked them to pick sides against the same 20 odd bookish scenarios....


Chris Bauer's
Would You Rather 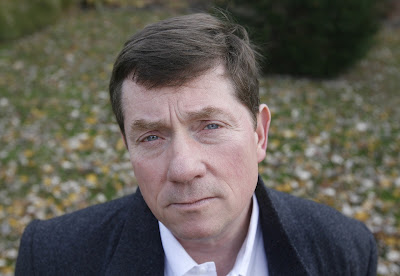 Would you rather write a book without using conjunctions or have every sentence of your book begin with one?
No conjunctions. Since you didn’t say what kind of book, we’ll go with a children’s picture book, and we’ll leave out all the conjunctions, even in the title. I have one in mind. The rethinking of a classic: DICK. JANE. ZOMBIES. FUN.

Would you rather write in an isolated cabin that was infested with spiders or in a noisy coffee shop with bad Muzak?
Coffee shop, Muzak, piece of cake. Seriously, if you gave me a piece of cake to go with the coffee and the shitty Muzak, I could probably make it work. And an MP3 player and earbuds. And other snacks. And some insecticide, in case the coffee shop is near the cabin with the spiders.

Would you rather write a book you truly believe in and have no one read it or write a crappy book that comprises everything you believe in and have it become an overnight success?
The latter. I can always write a second book that isn’t as crappy (don’t we all think we’ll do better the second, third, fourth time around?), especially if the first one makes some good coin and affords me the time and outlet to do it.

Would you rather have everything you think automatically appear on your Twitter feed or have a voice in your head narrate your every move?
You’ve been reading my tweets, haven’t you? Who is this really? I promise to filter my tweets from this point forward. I suppose I’d go with the former. To me living with brain dumps and their impact are far better than paranoid schizophrenia.

Would you rather your books be bound and covered with human skin or made out of tissue paper?
The human skin thing.
BONUS TRIVIA! SCARS ON THE FACE OF GOD, my first published novel, has as a central plot item a real-life 13th century manuscript called The Devil’s Bible that was written on what? ANSWER: Skin! It’s composed of 310 leaves of vellum claimed to be made from the skins of 160 donkeys, or perhaps calfskin.  SKIN IS IN!

Would you rather read naked in front of a packed room or have no one show up to your reading?
The reading naked thing. I always seem to survive the naked thing in my dreams (late for a final exam, didn’t study, I’m commando, then omigod where did my pants go?), so I’ll go with that.

Would you rather your book incites the world’s largest riot or be used as tinder in everyone’s fireplace?
How can anyone not pick riotous chaos versus being burned and lost forever? RIOTOUS CHAOS! LIGHT MY TORCH! RIOTOUS CHAOS!

Would you rather give up your computer or pens and paper?
Give up pens and paper, but this answer really hurts. I love having learned how to write in cursive, and having learned to print properly, but it has to be this way. It’s where we’re headed. Conserves trees, too. Add to this, I’ve gotten looks from my critique peers because I write my feedback in cursive on hard copies of their work. They would be mucho happy if I handed in critiques at our in-person meetings that were all typed. Writing in cursive is dying art.

Would you rather have every word of your favorite novel tattooed on your skin or always playing as an audio in the background for the rest of your life?
I’m not a tattoo guy, so I gotta go with the audio. Speaking of which, did I tell you that my political thriller JANE’S BABY came out in audio in August? No? Well yes, it did, and thanks for asking.

Would you rather meet your favorite author and have them turn out to be a total jerkwad or hate a book written by an author you are really close to?
The hate the book thing. An author can’t hit a home run every time. I just saw the movie Can You Ever Forgive Me? The story is about bestselling author Lee Israel falling on hard times so badly that she starts faking letters by famous authors and playwrights and selling them to pay her rent. It’s from her memoir, and in it she makes Tom Clancy out to be just such a jerkwad. Clancy wasn’t my favorite author, but he was still significantly revered. After this movie, maybe not.

Would you rather write only embarrassingly truthful essays or write nothing at all?
No contest here: write the damn essays. I already embarrass myself in so many other ways. Hopefully the essays would be entertaining on some level.

Would you rather be reduced to speaking only in haiku or be capable of only writing in haiku?
This is like asking what part of hell would you like to spend eternity in. I’m not a haiku guy. I’d have to pick the writing one, as sad as that would be for me. I’m not capable of speaking only seventeen syllables at a time.

Would you rather your book become an instant best seller that burns out quickly and is forgotten forever or be met with mediocre criticism but continue to sell well after you’re gone?
Give me mediocre criticism, which I assume also means mediocre success! And to be still selling after I’m gone? Good for my family, so that works for me. Where can I sign up for this mediocrity of which you speak?

Would you rather become a character in your novel or have your characters escape the page and reenact the novel in real life?
I’d rather be a character in my novel, or anyone’s novel, rather than let some of the characters that I create loose in real life. The good guys, okay-fine, no issue, but the bad guys, no, no, no. The stories do have some wonderful moments but they can be disturbing, violent, and at times gruesome, so let’s keep these people on the page only, or on the screen. (The screen. Yes! Having them make it to the screen would work.)

Would you rather have schools teach your book or ban your book?
Teach it. A plausible scenario for that happening? None that I can think of. The language and violent situations that the novel portrays would more likely get it banned.

Chris Bauer is author of BINGE KILLER (October 2019), HIDING AMONG THE DEAD (a Blessid Trauma thriller), JANE'S BABY, and the horror/thriller SCARS ON THE FACE OF GOD, 2010 EPIC Awards runner-up for best in eBook horror. Look for a new novel in the Blessid Trauma series in 2020. He's also editor of and contributing author to three CRAPPY SHORTS short story collections (SKID MARKS, NUMBER TWO, DEUCES WILD). As a Philly native he's had lengthy stops in Michigan and Connecticut, and he thinks Pittsburgh is a great city even though some of his fictional characters do not. He now lives in Doylestown, PA with his wife and supermutts Rory and Maeby Funke Bauer. He likes the pie more than the turkey. His short fiction has appeared in THUGLIT, SHROUD MAGAZINE, and 100 HORRORS, and he's been podcasted by WELL TOLD TALES. He's a member of International Thriller Writers. Find him at chris@chrisbauerauthor.com, chrisbauerauthor.com, facebook.com/cgbauer, twitter.com/cgbauer, pinterest.com/cntbauer1, instagram.com/cntbauer1. His tagline: "The thing I write will be the thing I write."