Tis the Season for Mr. Neutron 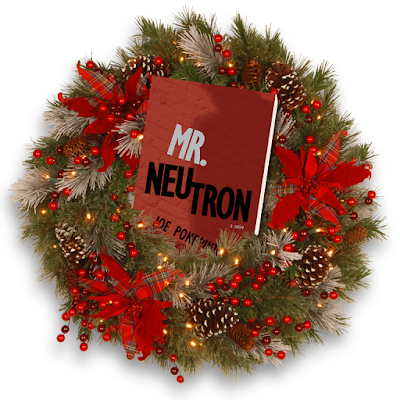 Joe Ponepinto's debut novel Mr. Neutron will be published by 7.13 Books in March.
But don't let the fact that it's not out yet stop you from getting in to the holiday spirit! 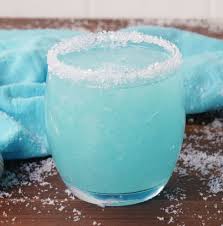 Directions
1.     In a blender, combine vodka, champagne, blue curacao, lemonade and ice. Blend until combined.
2.     Run a lemon wedge around the rim of each glass then dip in sanding sugar.
3.     Pour frosties into rimmed glasses and serve immediately.

In the smallish American city of Grand River, things are not so grand. The river is hopelessly polluted. City officials are in the pockets of oligarchs. And its best hope for meaningful change is a platitude-spouting eight-foot giant named Reason Wilder running for mayor.Gray Davenport, a veteran political operative, isn’t faring much better than his hometown. His wife is about to leave him. He’s working for a mayoral candidate who has no chance to win and who can’t even pay for Gray’s services. When Gray notices that Reason may not be human, Gray embarks on a quest to uncover the truth about Reason’s mysterious origins, and the truth promises to change Grand River and Gray forever.A satirical mashup of Frankenstein and Veep, Mr. Neutron is a hilarious genre-bender that speaks to the unpredictable nature of American politics today.

Joe Ponepinto is the founding publisher and fiction editor of Tahoma Literary Review, a nationally-recognized literary journal that has had selections reproduced in Best American Poetry, Best American Essays, Best Small Fictions, and other notable anthologies. His novel, Mr. Neutron, will be published by 7.13 Books in spring 2018. He is the winner of the Tiferet: Literature, Art & the Creative Spirit 2016 fiction contest, and has had stories published in dozens of other literary journals in the U.S. and abroad. A New Yorker by birth, he has lived in a dozen locations around the country, and now resides in Washington State with his wife, Dona, and Henry the coffee-drinking dog.

If you're interested in reviewing Mr. Neutron, please email me at mescorn@ptd.net.
We'd love to send you a digital arc!!
Posted by TNBBC Super Mod at 6:36 PM