Tis the Season for The Glamshack 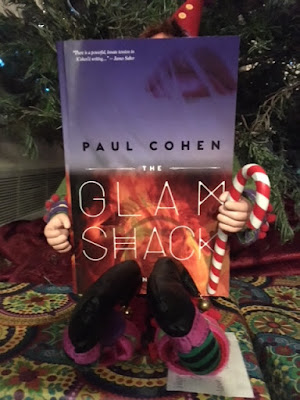 Paul Cohen released his debut novel, The Glamshack, back in June with 7.13 Books. It appeared in B&N's list of 10 debut novels for your Autmn Reading!

You can snag yourself, and your most beloved ones, a copy here.

Here's a taste of what you'll find inside:

What is it about Her particular brand of loveliness that turns old Henry to tapioca? She’s not delicate featured, not in the least. She’s got a big, strong jaw, hands that are almost manly, packaged cleavage and lioness hair. The hands remind Henry of his mother’s, no-nonsense, get-the-job-done hands. The jaw and cleavage and hair play superbly with the bearing, which is unhurried, regal, bemused. Her manner is this: you tickle me mildly. And—and this is what turns old Henry to tapioca--She seems to need enchanted moments as much as He does. What’s more, She seems to see enchantment in him. Which makes old Henry feel downright lovely. Even divine.

Paul Cohen's fiction has appeared in Tin House, Five Chapters, Hypertext and Eleven Eleven. He won the Prairie Lights Fiction Contest (judged by Ethan Canin), was a finalist in a Black Warrior Review Fiction Contest, received an Honorable Mention in the Glimmer Train Spring 2017 Fiction Open and was named a finalist for the 2016 Big Moose Prize for his novel-in-progress, The Sleeping Indian. His nonfiction has appeared in The New York Times Magazine, Details, the Village Voice and others. A graduate of the Iowa Writers' Workshop, where he won a teaching scholarship, he taught writing at UC Berkeley Extension, the University of San Francisco and the University of Iowa. He lives in Boulder, CO.