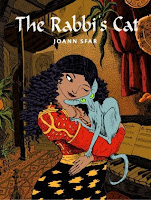 Last month, I review Sfar’s collection of four stories in one graphic novel called Vampire Loves. I was amused by the simplicity of the storytelling, a delightful feature of European books I don’t often see in American graphic novels. The Rabbi’s Cat was much, much better, and I’m sad to say that my copy is from the library. The story is set in Algeria in the 1930s and follows a cat that lives with his owners, a rabbi (his Master) and the rabbi’s daughter (his Mistress).

While I loved the story of Ferdinand the vampire, there wasn’t much continuity between the four separate stories. The Rabbi’s Cat is one story, which allowed me to see the characters grow. The rabbi’s cat, which has no name other than “cat,” thinks and learned to read alongside his Mistress. However, when he eats the annoying pet parrot, he gains the ability to speak. The cat is a liar, but tells the truth when it hurts others. For example, his Master says the cat must be a Jew, so they consult the rabbi’s rabbi to see if the cat can have a bar-mitzvah. The cat does not like the rabbi’s rabbi and says mean things about him to his Master:

This is a philosophical sort of graphic novel that gets readers asking questions about religion. The questions the cat asks stumps religious men: “I ask [the rabbi’s rabbi] to show me a picture of God. He says that God is a word.” Sfar draws the old man with a perplexed look, finger to chin in thought.

He is a challenging cat, one who asks a lot of questions about Judaism when the rabbi tries to teach him in preparation for becoming Jewish. 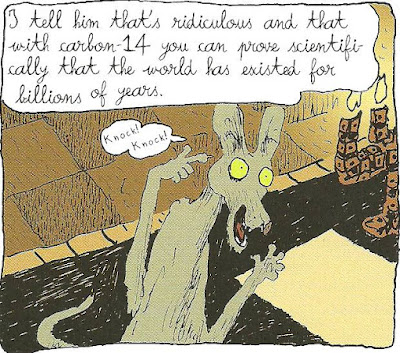 The cat, here, acts like an absolute insulting jerk. 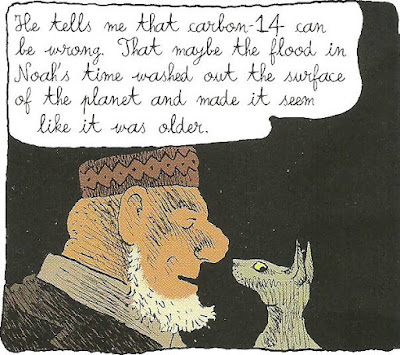 The cat listens skeptically as his master explains. 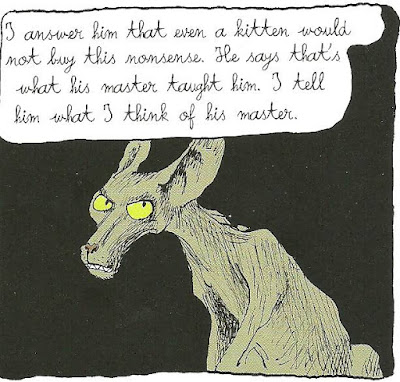 Look at that mean, awful face! The cat is rude toward the rabbi’s rabbi, and he demeans the lessons from his Master’s religion. 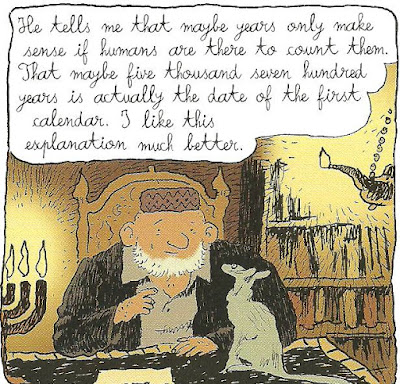 The cat isn’t always a jerk, though; here, he accepts his masters answer as more reasonable, and we see the kindness on the Master’s face.

The cat’s honesty is refreshing, but hurts his rabbi. To make up for it, the cat pretends he can’t speak and meows incessantly. The rabbi responds that “once you’ve left the Garden of Eden, you can’t go back.” This is a nice lesson on considering our words and what they do to the spirit of others. While honesty is praised, it’s not always desired.

The style of writing is unusual. It sounds like the cat is sitting here and telling me the story. Notice that his narration is present tense, but always begins subject + verb: I ask, I say, he tells, I tell, he gets, etc. This predictable pattern may sound dry, but it lulled me into happy contentment, and it was a style of storytelling that I didn’t notice until I was under its spell.

The cat’s speech abilities are short lived. When he tries to help his Master do well on a test, he prays to God, actually saying God’s name: “Adonai.” The story tells us that Jews are not supposed to say the direct name of God, and Sfar suggests that by using God’s name to help the rabbi, the cat is punished by losing his ability to speak. Cat goes on to listen and narrate, but Sfar suggests people of Jewish faith not be so bold as to invoke God when they should fear Him. The cat may have challenged Judaism, and the rabbi will as well later in the story, but for now there seems to be a direct disobedience-punishment correlation.

I am not a religious person, so I wondered how a story centered on a cat and Judaism would go over with me. The growth of the characters stems from religion, but the experiences extend to people of all, or no, faith, and I liked that universality. In fact, Sfar shows that humor is ubiquitous when the Master and his nephew Rebibo  try to get his cat to talk so a talent agent will hire them: “I tried my best, I really did,” thinks the cat, who, of course, can no longer speak. “MRAOW!” He adds, “Mraow! Mraow! Mraow!” The talent agent yells for the Master and the cat to stop the nonsense, but then “the dog thought he should intervene” The stray dog they picked up begins jumping around and dancing on his hind legs: “WOOF!” The talent agent is not impressed, and the whole scene comes off like a comedy of errors as these animals do their best to help the kind rabbi and his nephew.

The cat also develops human worries when he gains the ability to speak. He has terrible nightmares about losing his beloved Mistress, and in his dreams he lies to himself, saying she’s okay, that she’s just on vacation. The water in the image implies the cat is overwhelmed with fear of suffocation in an emotional sense, and we see the water line rise above his face. 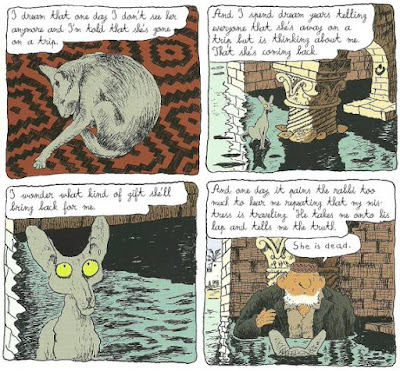 Sfar’s drawings in general look haphazard, reflecting the way we dash through life and how messy it can be. The cat always looks cat-like: curled up, standing on papers, in the way, curious, draped over his Mistress’s lap. Yet, he looks odd to me. See how long his face is in the image above? It turns out that Sfar’s own cat looks just like that: 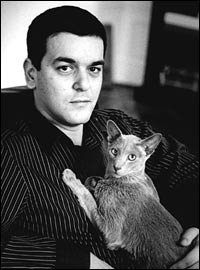