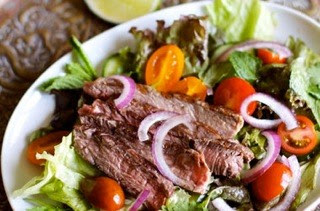 I traveled north last week to spend some time in Massachusetts taking care of my 27-year-old son, Hayes, who had to have knee surgery (you can get the whole story in my monthly column in our hometown site, Baltimore Fishbowl, Oxyclean and Oxycontin: The Mothership Visits Boston.) In it I talk about the pleasure I took in making some of Hayes's old favorite dishes from my motherly repertoire.

One of his choices was Thai steak salad, which he especially loves because it has almost no carbohydrates and he is very influenced by the Paleo diet. Perhaps you have heard of this  diet -- it involves living the way the cavemen did, eating only the finest organic grass-fed beef and heirloom vegetables and engaging in endless, mindless hours of physical exercise. (Having finished unloading his wallet at Whole Foods, Paleolithic Man went to the gym, where he was known to dead-lift 400 pounds, after which he indulged in the protein shakes of the Iron Age. Paleolithic Man did not eat pasta, he did not drink lattes, and late in the Paleolithic era the discovery of vodka allowed these awesome, disease- and body-fat-free creatures to make vast advances in their ability to hunt and gather women.)

And Thai steak salad is as Paleo as can be! I usually make this recipe with London broil, which is one of the most affordable cuts of beef and also happens to be the very few dishes I remember from my own childhood. My mother was not an avid cook — she was a sportswoman, a gardener, and a bridge wizard but unenthusiastic in the kitchen. I've made up for it many times over.

To use London broil for this salad make the marinade below and give it at least half a day. I don't know the quantities but basically this is my version of this really great Mark Bittman recipe -- use it if you aren't as freewheeling as I am.

You can also thinly slice some onions and lay them on top of the steak when it's marinating. And you can make shallow cuts crisscrossing the meat as well. If you use more expensive steak marinating is not as important.

When you're ready to eat, broil the steak or cook it on the grill. Then slice it thinly and put it over a lightly dressed salad of spring greens, cucumbers, cherry tomatoes, and red onion. Put lots of fresh mint and cilantro too. Yum! If the people you are feeding are not Paleolithic, this is great with garlic bread.